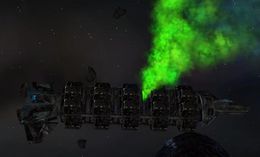 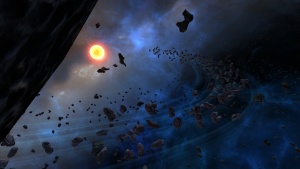 A desolate star system, a few light years from Earth.

A Bolian freighter, the S.S. Azura, has gone missing on her way to Earth Spacedock.

Upon investigation it is found out that the ship was attacked by Orion ships in an asteroid field, near Federation trade routes.

As the last attackers are driven away, the ship's warp core is about to go critical. However, radiation leaks prevent the transport of the people on board.

The Azura might be doomed. Still, it is the officers' turn to save Captain Brott and her crew, while fending off boarding Orion thugs and privateers, as well as Klingon reinforcements.

<rank>, I've received a report that there is a Bolian freighter that is overdue arriving at Earth Spacedock. It may need assistance.

Danna Brott is an experienced captain and the daughter of a former Starfleet officer. It's not like her to be out of contact.

Your orders are to head out to Sector Space and find the Azura. I've already transmitted the ship's last known coordinates to your conn officer.