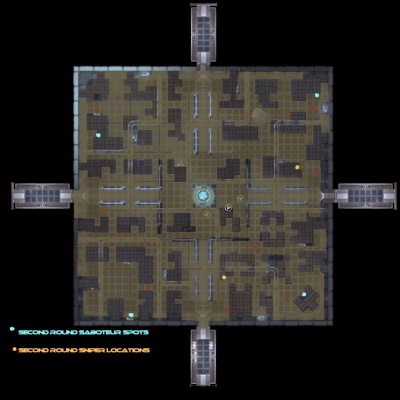 Admiral, we've locked the intruders in the cargo bay, but there's still a lot of damage they can do there. We need you and your team to go in an stop them. Grab a flashlight from the box here if you don't already have one - the first thing the intruders did was to cut the lights and disable internal sensors. We've tied to restore them, but they've changed the override code. Defeat as many of the intruders as you can. But keep an eye out - there are enemy patrols in the area too, and they're tough. I expect the intruders to fight back, but we have reports from the other area of the starbase that some are surrendering when confronted. If you find one of those, we'll transport them to the brig.
Defeat the intruders in the cargo bay.

In this wave, saboteurs and support personnel (all ensign and lieutenant-level) will beam in randomly throughout the cargo bay area. Players are instructed to hunt them down and encouraged not to loose time shooting turrets and support personnel. Every saboteur defeated in this stage yields additional Fleet Marks.

The two most common tactics used in this mission are:

Everyone will be returned to the same room you started in during a cutscene explaining the next phase.

Admiral, the enemy is changing up their tactics. They've taken up defensive positions and are protecting a saboteur. Stop them before time runs out.
Defeat the saboteurs.

In the second wave, there are only 4 saboteurs (each one a commander) and they are resident through the entire phase until killed. However, there are also vast numbers of support troops who will attack players on sight. While there are a number of methods that can work well, this article won't list them all and instead will focus on a few tried and proven methods, including: 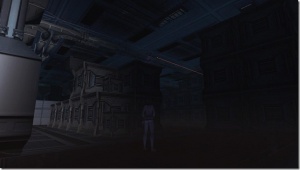 The crowded, darkened cargo bay can be difficult to navigate for inexperienced Captains, especially without a Flashlight

There are two sniper positions (see map) on the right hand side that can be used, carefully, to take out the saboteur. You'll want to be careful with your aim and movement to your position however, as straying to close to the support troops or catching one in your fire will bring most if not all of them running.

Tactical officers with the Stealth Module can usually sneak in to any of the four positions, tuck into a convenient shooting spot and kill the leader alone, without arousing the support troops (see map), however carrying a few heals can be handy in case the support troops do move to engage you.

This trick can be done in a few ways, and also takes advantage of the herd mentality of the support troops and can be used alongside other tactics.

For example, an Engineer with plenty of explosives can rig the doorway to the starting/respawn area. This Engineer can then go out and grab the attention of the troops in the bottom left and right areas, running back to the rigged doorway with the troops following. This allows for the other team mebers to move in on the saboteurs while the support troops are killed by the Engineer. This process can be repeated on the top left and right sections.

While this is one example on how to do this, the basic premise is to have a capable member or two of the team pull the threat of the support troops while the others kill the saboteurs by taking advantage of the resulting opening.

As before, everyone returns to the room you started in.

The enemy captain has transported into the area. The infiltrators are using our own force fields to protect their captain. There's a console near the area that will drop them, but I'll need to override the holocloak they're using to hide it while you engage the guards. When the shield drops, you know what to do!
Defeat the captain.

In the final wave, the captain and a small cadre of support crew are behind a force shield in the center of the cargo bay. Players must kill two waves of support crew outside the shield before a device uncloaks that will allow them to bring down the shield. They must do this before the captain can finish communicating their desire to beam out (progress bar).

It should be noted that the bar for the Captain to beam out, and the clock which ends the wave if all aren't killed, begins only when the first player leaves the holding area.

To beat this final part of the mission requires some awareness on the part of the team. This is because it is possible for the support troops to go into the stacks of crates to avoid Area-of-Effect powers and such like and then become hard to find, which can mean lost time regarding the beam-out of the captain.

Therefore, it is best to limit the use of lingering Area-of-Effect powers and take out the troops as fast as possible, both the first group then the second that beams-in. If you have any Engineers on the team with explosives they can rig the shield near the captain in preparation for the shield dropping. Regardless, the faster the troops are killed the sooner the console can be activated (located near the captain). Kill the captain first and kill any remaining troops after.