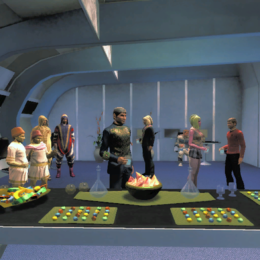 In Return to Babel, the player visits the Enterprise to prevent a temporal incursion.

Admiral Garrett orders the player to lead the negotiations with the Coridian rebels for the release of the hostages. When the player arrives at Babel, Daniels reveals that these events are the result of the Temporal Cold War, and sends him along with Temporal Agent Captain Chekov to 2268, to preserve the Babel Conference and fix the timeline. In 2268, Chekov order the player to go to the Enterprise's bridge to recalibrate the internal sensors to detect the Na'kuhl. The scan results indicate something on Deck 11, so Chekov orders the player to scan the diplomats on the Lounge on that deck. While doing that, Ambassador Gav starts arguing with Amb. Sarek, forcing the player to speed up the scans. The scans indicate recent Na'kuhl interference, so Chekov suggests the away team to keep searching the deck. Eventually, they discover Gav's corpse being hidden by Na'kuhl, and after dealing with them, they suspect Captain Kirk to be the next target, the team goes on its way to deck 5, and stop the Na'kuhl from killing Kirk. The player then stabilizes Kirk's wounds, and heads to Engineering, but not before the ship comes under attack. In engineering, the player and Capt. Chekov find Lt. Cmdr. Scott and help him in keeping the ship functioning and in disarming the Na'kuhl time bomb, and, after Capt. Kirk disables the attacking vessel, the away team beams aboard with the bomb, leaving a temporal beacon behind for Scotty to pick up. On the Orion ship, the player and Chekov plant the bomb on engineering, destroying the Orion Vessel, preventing the destruction of the Enterprise, and thus restoring the timeline. After this, Daniels extracts everyone from this year back to 2270.

We have a problem at Babel. Coridian rebels have taken several Federation trade officials hostage... they're threatening to kill them unless the UFP withdraws from the Coridan sector. I'd like you to work with the negotation team and try to resolve this peacefully.

Travel to the Babel system.