The Borg Invasion is the collective term for a number of Borg-related missions and events that were introduced in 2011 and 2012 with Season 4, Season 5, and Season 7. 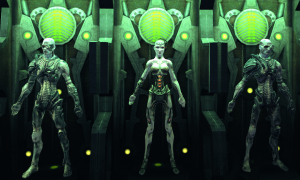 The Borg drones of 2409 can now adapt to different energy weapons after several shots. Only by remodulating weapons with a [Frequency Remodulator] (obtainable from your ship's replicator) can you overcome this. The Borg no longer rely on Interlink Nodes and do not call for Proto Drone reinforcements. However, their assimilation ability is far more powerful: it can turn a player into a drone, usually resulting in his or her teammates following advice from a previous Borg attack on the Federation in 2373 (2063):

"You may encounter Enterprise crew members who have already been assimilated. Don't hesitate to fire. Believe me, you'll be doing them a favour."
--Capt. Jean-Luc Picard

All Borg ships got a graphic overhaul and two more were added: the Unimatrix 0047 Command Ship and the Borg Queen's Octahedron. The latter was temporarily removed from the game until the addition of “Hive Onslaught” in Season 7.

Red Alert: Borg is a mission available during the special weekend events[1]. It can be started from the sector space where a red Alert: Distress Call button will periodically appear for a limited time. By clicking it, you will transwarp to the Borg fleet location where you are offered to join a PvE queue. Alternatively, you can join it from the Task Force Operation‎‎ menu where it is always available during the event period.

Team of five players, which can be from either faction, can join in one of these encounters. There is a minimum level requirement of Vice Admiral/Lieutenant General (level 50).

Mission objective is to eliminate four Borg engagements of probes, spheres, cubes, and tactical cubes in 15 minutes. If you are successful, an extremely large Unimatrix 0047 Command Ship‎ (over 8500 meters in length) that uses Regeneration Probes, Tractor Probes, and fires devastating Plasma Energy Bolts will warp in. The command ship appears very similar in appearance to that of V'Ger. There are ten named vessels, of form Vessel One of Ten Unimatrix 0047. Defeating this vessel was optional prior to season 6. Since Season 6, it is now required to destroy this vessel in order to complete the daily mission successfully and receive credit for completing the encounter.

There are a total of 35 accolades associated with these encounters. 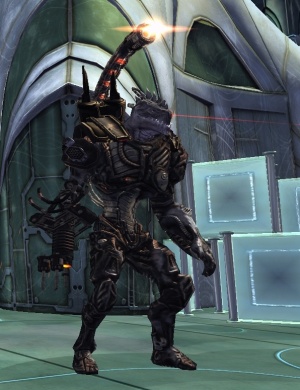 The Deferi Borg invasion event used to occur only during three days a week, for 2 hours per event. Now, it runs all day.

"The Ground Invasion we are working on will put a specific species home world in jeopardy. In the movie First Contact, the crew of the Enterprise views an assimilated Earth in the future. We wanted to bring this sort of tension into the game by having the Borg make an effort to assimilate a planet and show both the Federation and KDF just how difficult it is to remove the Borg from a planetary population center once they dig their heels in. The new zone will allow captains to play solo or team up with others in order to complete a host of different missions aimed at combating the Borg “creep” and rescuing as many civilians as possible before they become Borg. This will be a timed event that will take place over the course of a few hours, after which the Borg will retreat and regroup, then try again. In order to complete many of the objectives, players will need to work quickly to maximize their time and take advantage of the opening."[2]

A species in the game is going to be at risk of being assimilated and both Feds and KDF must attempt to defend the planet from being overrun with Borg. This event will most likely be a big weekly occurance. It will have multiple missions, allow anywhere between 25 and 50 players per zone and be one of the coolest repeatable ground events we have in the game. It will scale with level and have both easy and hard mission objectives that teams can attempt during the assimilation event.[3]

There are 6 accolades - killing all the named bosses in Power Plant and Probe areas, as well as completing the following missions (easy missions unlock medium missions which unlock hard missions):

Following the launch of Season 5, the Special Task Force (STF) missions were reworked to incorporate a number of usability changes.

The following missions are available as part of the Borg Invasion STF series.

Stage 4: Into the Hive[edit | edit source] 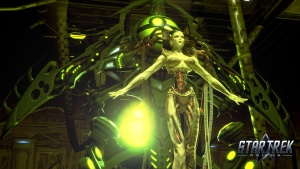 There are numerous accolades and titles for achieving optional objectives, completing each STF multiple times, and unlocking the costumes associated with each gear set.