Mission: Prelude to a Crisis/Walkthrough 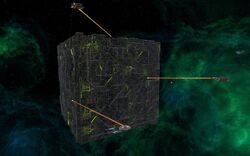 The Borg have returned 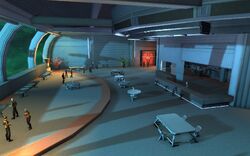 You start off the mission in the crew lounge of your starship, in the midst of a Borg attack. Outside the windows you can see the battle raging on in the distance.

You are equipped with the following items:

Your Light Cruiser is equipped with a standard issue complement of the following:

This section of the mission is the beginning of the tutorial walkthrough that shows you how to use certain mouse and keyboard functions.

Talk to the Captain[edit | edit source] 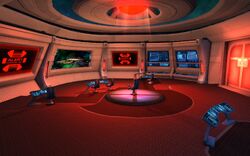 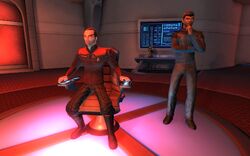 The Captain and his First Officer

Once on the bridge, speak to Captain Qat'Anmek. He will tell you that the Borg are attacking the Vega Colony. Your orders are to join the fleet that was fighting the Borg, coordinated by the U.S.S. Khitomer. He then tells you to hail the ship.

As all three of the forward consoles are glowing, any of them may be used to hail the Khitomer. Interact with any one of them. For example, if you interact with the center console, Ensign Koja Nara responds, saying that the Khitomer is responding — however, the signal is not coming from the Khitomer's bridge, but from an Emergency Medical Hologram in one of Khitomer's medbays.

The Khitomer Emergency Medical Hologram appears and requests assistance from any Federation vessel in range. He reports that the Borg that are boarding the Khitomer are different from the typical Borg from the past. They appear to be "disconnected" in a sense — strange, yet still dangerous.

The EMH reports that he's lost contact with the bridge, and Main Engineering is under attack. He then calls for immediate assistance.

Captain Qat'Anmek then asks you if you're ready for a mission; you are to beam over to the Khitomer and assess the situation after you meet with the Security Chief in the transporter room.

Take the turbolift at the back of the bridge, which leads down to the transporter room. 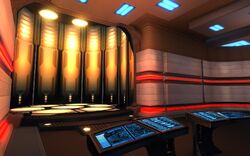 In the Transporter Room you will meet Lieutenant Commander Mercedes McMary, who will send you over to the Khitomer's Auxiliary Medical Bay.

Step onto and use the Transporter Pad to beam over to the Khitomer.

Continue with next mission