This mission is only available to players who have completed Tier 3 of the Romulan Reputation System.

During the mission the player may choose to download up to three New Romulus Research from the Dewan figurines scattered throughout the map. 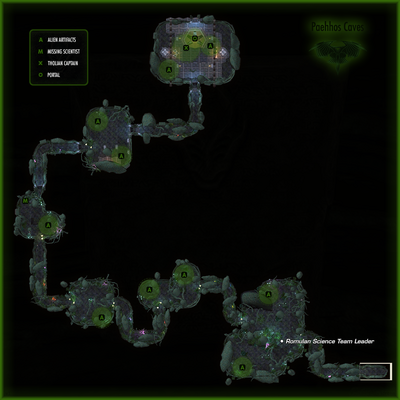 This mission is given by the Romulan Civilian that stands near the transporter in the Paehhos Crater.

We've recieved a message from a science team exploring a series of caves here in the Paehhos Crater area. They seem to be having some trouble and now one of the scientists is missing.

It may be nothing, but I'd feel better if we had a trained team check it out. Please find the science team leader in the overgrown caves. He should be able to tell you more.

After accepting the mission, the player begins the Caves Instance (the location of which is marked on the New Romulus mini-map).

After walking a little bit further into the Caves the player will enter the first chamber, which contains a number of Romulan scientists. The player speaks to their leader.

I'm very glad you could take time to assist us.

We've been having some strange occurrences lately. Noises we can't identify are being heard deep in the caves, and our supplies keep disappearing. One of my scientists volunteered to investigate, and he hasn't returned.

Would you be willing to look for him? Any scans you could take when you're in the caves would also be very helpful.

Scan artifacts in the cave and search for the missing Romulan scientist.

The player moves out and scans the artifacts as they go. The location of each artifact is included in the map at the top of this page. Dewan arthropods will occasionally attack, but they're not tough enough to pose a serious threat.

The third chamber will be blocked off by a Tholian forcefield. After disabling it, the player enters the room and scans two device near the door.

I managed to clear up some of the interference. I am detecting Tholian lifesigns ahead of your coordinates. Please proceed with caution.
The Tholians are flooding this area with a low level of thoron particles. The particles won't harm us in small doses, but it could be an attempt to trick out tricorders. I suggest that we stay alert.

The player will encounter two EV-suit clad Tholians (an Ensign and a Lieutenant) guarding the captive scientist. After defeating them the player frees the captive.

Thank you, Admiral. I don't know what happened. I was taking samples and then everything went black. The next thing I knew I woke up wrapped in webs.

He will then run off to safety. As the player presses forward, the Tholian Captain will send a transmission through the base.

The player examines a Tholian console at the bend of the corridor.

The Tholians seem to be gathering information on the Dewan ruins. They appear to be especially interested in the relationship between the Dewans and the Iconians.

The next room will contain a large number of Tholian troops, including two Commanders. This is a difficult battle, but fortunately the respawn point is right outside.

After defeating the Tholians, the player can examine a console in the room.

The Tholians seem to be collecting extensive data about Dewan technology. They seem to be particularly interested in artifacts related to gateway technology.

And after examining a strange plant...

It's unusual to see a plant of this type thriving so far underground, Captain.

We know the people who once lived on this planet retreated to caves after some type of environmental disaster. Perhaps they bioengineered plants that could survive underground as food sources.

We're still seeing the results of their experiments thousand of years later.

There is also a large artifact in the room, a Dewan tablet. Scanning it will give the player a Last Days of the Dewans chapter accolade.

The player will move on. At the next bend, they can scan another unusual plant.

This plant has developed bioluminescence. It could be a way of attracting pollen-carrying insects or a warning for hungry animals.

The player will enter the final room, which contains a relatively small group of Tholians. After they are defeated, a second group containing two Commanders will beam in and eventually the formidable Tholian Captain's group will spawn.

After defeating the last group, the player has to shut down the portal in the back of the room. After they do so, the player's science officer will make an observation.

It's similar to the rifts on Nukara Prime, but more stable. And we know that the Tholians were trying to harness the rifts as a form of transportation to other dimensions.

If I had to guess, I'd say that it could be a Tholian transporter. Wouldn't want to try it, though. There's no telling where we'd end up.

The mission is now over. If the player has “Web Access” in progress, they can review a secret recording by scanning one of the transporter's console stations.

You can also scan one of the Tholian lab stations if you wish.

Captain, the Tholians have several flora samples in quarantine. They may be attempting small experiments to see if the planet could be made habitable for them without environmental suits.

You can exit the caves at your leisure.

I'm glad you were able to find the missing scientist, but I never expected those caves would be overrun with Tholians!

We'll be sending more security down to protect the science team, but they're determined to finish their work. Thanks to you, they'll have the chance to do so.