Mission: Night of the Comet

Night of the Comet

In "Night of the Comet", the player travels back in time to 2265 in order to destroy Driffen's Comet and thus bringing the Devidian incursion to a stop.

It has been decided, that Driffen's comet has to be destroyed in the 23rd century in order to prevent the Devidians from using it to permanently shift the entire region into their realm. The player is sent to the Bepi 113 System in order to perform a Slingshot maneuver. The ship is disguised as 23rd century Klingon D7 Battlecruiser using a holographic emitter.

The slingshot effect throws the player's starship immediately in close proximity of Drozana Station. The U.S.S. Reuben James commanded by Commodore Ross mistakes the player's ship for a Klingon vessel responsible for an attack on the Gliese colony. The player has to disable the ship, since the Commodore is not supposed to die that day.

The player cannot continue to destroy the comet, since Drozana Station is being boarded by Devidians. The player beams over with an Away Team in order to defeat the Devidians and put an ongoing bar fight between Klingon and Starfleet officers to a stop. Pushed back, the Devidians retreat to the Casino and take hostages. The Shrouded Phantasm threatens to destroy the station if the player does not leave. The away team blasts through the door and defeats the Phantasm.

Among the freed hostages is Lt. Cmdr. Scott, who is eager to repair the station's shields before the rising levels of triolic energy starts to become lethal. He finds that he needs a Quantum Flux Regulator Mark II to complete the task. He knows that the stations store keeper Cassidy can find one and tasks the player with getting it.

Cassidy however is in shock and not able to remember where the item can be found. She asks for a nerve tonic to calm her down. Back at the bar, the patron explains that he needs a lot more information, since he knows how to prepare several thousand tonics. The Orion waitress is of no help either and can only think about taking care of her love interest Captain McQueen, who has been knocked out during the bar fight. She points the player to Mr. Scott, who is an expert in alcohol. Back in the shipyard, Scotty reveals himself to be a lover of Cassidy's and knows a lot about her drinking habits. With the information from him, the bartender is able to prepare the Nerve Tonic. Cassidy loves the drink and immediately remembers where to find the Regulator. The piece helps Scotty to remodulate the station's shields, but the triolic energy keeps rising. The shield modulation will only buy the station a little bit of time and the away team beams up to the ship to destroy the comet.

In the mean time however, the I.K.V. [sic!] Quv with Captain B'vat in command has entered the system. Accidentally, the player's ship is disguised as a House of Duras vessel, with which B'vat has a feud. So the player has to destroy Driffen's comet without killing B'vat in the process. The comet breaks apart into several fragments and shards, each of which have to be destroyed.

Shortly after the comet is destroyed and the triolic energy has dissipated, a temporal anomaly inside the player's ship begins forming. A pre-recorded message is played, informing the player that a Borg temporal node recovered from the B'Tran Cluster was installed during the ship's last visit to a starbase by intelligence which will bring the ship back to the present.

We've determined that the Devidians are using the triolic energy of Driffen's Comet to ease their entry into our phase variance. That is the cause of all of the incidents in the neutral zone.

But it's worse than that. It's possible that, given the amount of triolic and temporal energy in that comet, that the Devidians will be able to destabilize the area of space surrounding the comet enough that they will pull it and everything in it into their phase variance.

In essence, they're trying to "steal" an entire sector. The resulting effects to the surrounding space would make the destruction of Romulus look like the popping of a party favor.

The only thing we can do to stop it is destroy the comet before the Devidians can use it. It's not enough to do it in the present, because the Devidians would still have access in the 23rd century when the comet moves past Drozana Station. We have to destroy it there.

You'll need your ship this time, so you can't use the Devidian portal on the station. I can help you get to the past, but you'll need to follow my instructions precisely.

Go to the Bepi 113 system, in the Boreth Sector of the Beta Quadrant, save the past from the Devidians.

Player performs the slingshot maneuver in order to return to the past. 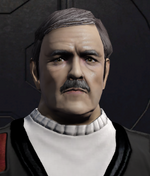