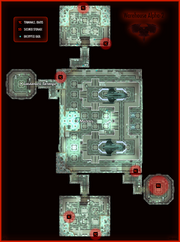 A map of Warehouse Alpha-2.

This mission is only available to players who have completed Tier 1 of the Romulan Reputation System.

Lieutenant Tanenga in the warehouse contacted me. The colony is having supply issues, and the source of them may be a Ferengi contractor they hired to manage the supply lines.

We think having a neutral party like you would help defuse the conflict. Would you be willing to sort this out?

Speak to Lieutenant Tanenga inside the Warehouse.

After accepting the mission, the player enters the warehouse. Lieutenant Tenenga should be right ahead. Talk to her.

Jolan tru, Admiral. We appreciate you taking an interest in our affairs.

Right now, we're having a supply problem. There's a Ferengi trader here named Madran who seems quite capable of making a profit, but less than capable of keeping an accurate track of our shipments. I've tried talking to him, but he seems to treat any conversation as a type of negotiation, and I'm hesitant to escalate this problem to D'Tan's attention.

Kylor suggested that we use a third party to help us work out a solution. Would you be willing to speak to him on our behalf? Maybe you can get through to him.

The player enters the main warehouse and goes to Madran's office. The contractor, whom the player previously met in “Mine Enemy”, is less than pleased to see them again.

Last time I saw you I had a sweet little mining business on Hfihar and some information brokering on the side. Now all of that's gone -- the mine, the intel, everything! I'm lucky I still have a tooth sharpener!

Get out before I call security!

I stand by my paperwork and my inventory. It's not my fault if the Romulans can't count. They don't have the lobes for business!

Look, you can review the cargo manifests yourself and match them to the supplies in the crates, but I'm sure a big important Starfleet officer like yourself has more important things to do. If you want to bother with it, though, knock yourself out. The terminals in the warehouse have the manifests and the crates are nearby.

I'd help you check, but I have real work to do.

Oh, and don't mind the Orions! They're subcontractors working for me -- lots of willing hands to help, if you know what I mean!

The player will then check the cargo manifests on the terminals in the warehouse, and then compare them to the contents of the crates in the warehouse (see the map above). After finding them don't match, you return to Madran.

So you checked the manifests? And the crates? And they don't match up?

Heh -- I knew I should have gone with you. Then I could have explained that the more valuable supplies are in a secure storage unit. You can't be too careful, you know -- someone might be trying to steal something!

Here, let me open the secure area for you. It's at the far end of the warehouse.

Go to the secure storage area.

The player will go the secure area where, after scanning the room for the missing inventory, they will suddenly be ambushed by a number of Hirogen. Madran will gloat over the loudspeaker:

You couldn't just leave well enough alone, could you? I should have known -- your type are all meddlers! Now you've gone and upset my Hirogen friends and they want to have a discussion with you. Enjoy!

After defeating the attackers, the player returns to Madran's office (after fighting past a large number of Hirogen and Orions) and finds it empty. Your tactical officer observes:

Admiral, it looks like Madran escaped through a secret passage.

He's probably on his way to a shuttle right now. We have to stop him.

As the player makes their way toward the shuttle, Madran pleads for mercy.

I had no choice! The Tal Shiar is controlling my family! Well, they have my assets, and latinum is like family to a Ferengi. Please, please have mercy on a humble businessman!

Unfortunately, by the time you fight past Madran's bodyguards he will have slipped away in a shuttle.

The mission is now over, but before leaving you can download up to three New Romulus Research from the Encrypted Data locations if you want.