This mission is only available to players who have completed Tier 2 of the Romulan Reputation System.

During the mission the player may choose to download up to three New Romulus Research from the Encrypted Data locations. 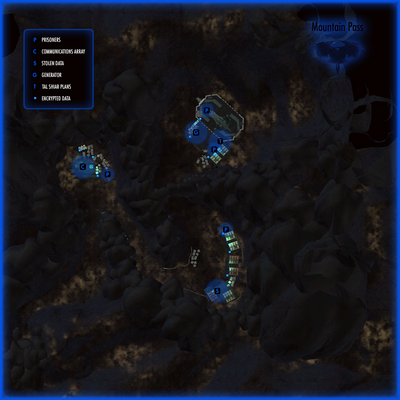 This mission is given by the Romulan Civilian that stands near the Mountain Pass transporter in the north of Vastam Peaks.

Glad you could make it, Admiral.

We've pinpointed the location of a communications array used by the Tal Shiar. They're using a lot of people to protect it, so it has to be important to their efforts here. It might even be their link to their leaders.

Sometimes the best course is the most direct one. If we take out that array, it should strike a major blow against the Tal Shiar here. If we can just get a little breathing room, we can build up the colony enough that they will no longer be a threat to us.

Infiltrate the Tal Shiar base in the Vastam Peaks.

After accepting the mission, the player begins the Mountain Instance (the location of which is marked on the New Romulus mini-map).

After walking a little bit further into the Mountain Pass the first group of enemies comes running down the road. Some new objectives appear as this happens:

At this point, Commander Ruul becomes aware of the threat to his installation.

Moving a bit further up the road will trigger the third group of enemies that will come running down.

Moving a bit further up the road towards the shuttle area, will trigger the fifth group of enemies that will come running down. After defeating them...

Your continued resistance is forcing me to take direct action.

This is regrettable, but your deaths will pave the way to a new Romulan Star Empire -- one controlled by the Tal Shiar.

The sixth group of enemies is made up of Hirogen and is located as a first line of defense for the shuttle area. Fighting this group may trigger the seventh and final group that is very close behind, and this can hurt.

After fighting the last groups of enemies (capturing Ruul in the process), the player frees the two remaining Prisoners, disables the Generator and (if the player desires) downloads Encrypted Messages that appears to describe the Tal Shiar plans.

Admiral, I have decrypted the message we recovered. It appears to be from Colonel Hakeev to Commander Ruul:

"Commander, the darkest hour of the Tal Shiar draws near. The Reman project is a failure. Even now, forces from Starfleet and the Romulan Star Empire approach our base on Brea III. Sources indicate that the empress may take a direct hand in the matter, although I do not know which side she will support. There is no love lost between us.

We will fight to the last man. But if Brea III falls, the Tal Shiar must survive. We are the last hope of our people. Darkness is coming. We either embrace it or surrender to oblivion.

"I am depending on you to continue the work I have started. We can no longer risk direct confrontation with Starfleet or the Empire. Use the subspace scattering device to conceal your location as long as possible. Move in shadow. Act with deliberation. Use catspaws as the demons have used us.

The Remans are drunk on freedom. The remains of our people are shattered and broken, begging for scraps when they should be taking revenge. The Empress serves no one but herself. The Tal Shiar is the empire! We alone remember what it is to be Romulan.

I have the utmost confidence in your abilities, Commander. Do not disappoint me."

If the player has “Secret Shuttle Codes” in progress, they can review a secret recording by scanning Ruul's shuttle.

The player may also examine a device to the west of the shuttle.

This appears to be a subspace scattering device. It is somewhat reminiscent of Romulan cloaking technology. This device could account for the fact that this base hasn't shown up on long-range sensors.

At this point, the mission is complete and the player may return to the Vastam Peaks. After exiting the Mountain Instance the player returns to the Romulan Civilian.

We have a lot of questions for him. I know he's not going to just start telling us all his secrets, but any information he reveals will be valuable. There aren't many left in the Tal Shiar with his security clearance. Hakeev's death hit them hard, and now the survivors are just trying to hold on to the status quo.

We're not scared of the Tal Shiar anymore. Without fear, they're powerless.