In Mountain Base, the player has to infiltrate a well-hidden Tal Shiar base in the Mountain Pass in order to take out their communications array.

The player must accept (or replay) this mission in order to gain access to the Mountain Pass, which is required in order to complete “Secret Shuttle Codes”.

The player enters the mountain pass and completes a number of tasks including freeing New Romulan prisoners, disabling the base's communications array, and recovering stolen data. Eventually they fight and capture Commander Ruul, and discover that he has replaced Hakeev as leader of the Tal Shiar.

Glad you could make it, Admiral.

We've pinpointed the location of a communications array used by the Tal Shiar. They're using a lot of people to protect it, so it has to be important to their efforts here. It might even be their link to their leaders.

Sometimes the best course is the most direct one. If we take out that array, it should strike a major blow against the Tal Shiar here. If we can just get a little breathing room, we can build up the colony enough that they will no longer be a threat to us.

Infiltrate the Tal Shiar base in the Vastam Peaks. 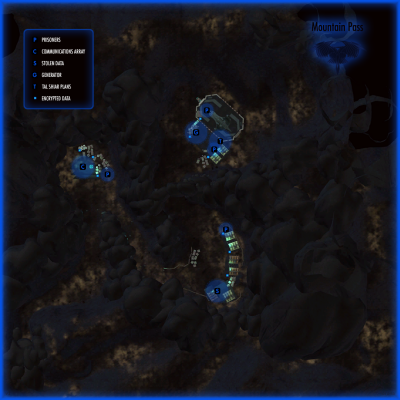