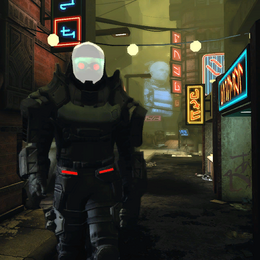 The Lukari have discovered lifesigns similar to their own on the Class-M planet within the Gon'cra Nebula. The player is asked for assistance in unraveling the mystery behind the biosigns on the planet, and help in uncovering the reasons for the inexplicable failure of the probe that gathered this information.

While searching for signs of weaponized protomatter, one of our long distance research probes made a most curious discovery. It found a Class-M planet at the hearth of the Gon'cra nebula.

That's not the most exciting news, however. The probe detected the presence of sentient life on the planet. The biosigns were very similar to our own.

It is possible that we have discovered a lost tribe of Lukari! We're going to investigate and we'd like some backup. The probe went offline rather suddenly after detecting the planet. These people may not be very friendly!

Enter the Gon'Cra Nebula in the Alpha Quadrant.

This mission is repeatable through Mission Replay, although the Rewards for completing may be reduced.