Given by:
PvE Queue
Minimum Level:
50
Repeatable:
Yes
Released:
November 13, 2012
Plus one of the following: 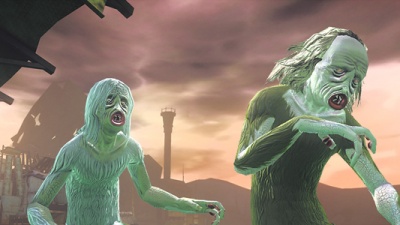 Mine Trap is a 20-player ground mission in which Species M-113 attacks the Romulan mining colony in the Hfihar System.

The player must first investigate a strange death on the colony. It is revealed that it was caused by Species M-113, also known as Salt Vampires.

Next, the players must warn the colonists to take refuge inside. Players must then fortify the buildings in the four districts. They then must defend the buildings from the Salt Vampire attacks.

Then, players must escort all surviving colonists to a shuttle landing zone, as well as protect them from further attacks. Once all colonists have been rescued, the mission ends.