Khitomer in Stasis is a Special Task Force ground mission requiring a team of five players. 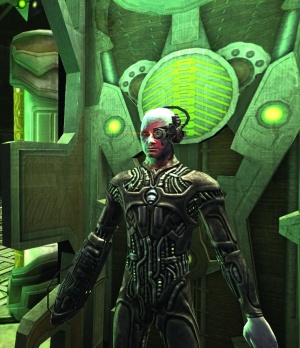 WE ARE THE BORG!

This part of the mission involves reaching the "Node Room".

Players arrive in a room at the top of the underground complex. As you leave this room the 15 minute optional objective timer will start, so do not proceed into the corridors until everyone has beamed in and is ready.

Proceed down the corridors, taking out Borg as you go. You don't have to go down every corridor at every junction, but remember which corridor you took, so that you have a clear path when you respawn.

After passing through an intermediate room and another corridor, you will come to a room which has a force field protecting the exit. The force field will not drop until all the Borg in the proceeding corridor have been defeated. Once the force field is down, exit the room ignoring the remaining Borg, proceed past the information node and first Isolinear Molecular Reconverter (IMR), making your way to the Node Room. You will return to this IMR later.

This part of the mission involves destroying the six Power Nodes and two Isolinear Molecular Reconverters. 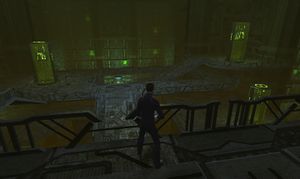 The Node Room is a large room consisting of six Power Nodes protected by cylindrical force fields, one IMR protected by a force field, a console, and groups of Borg protecting each node. The room has three levels (1 = top, 2 = middle, 3 = bottom) with two Power Nodes per level (Alpha = left of map, Beta = right of map).

Clear all of the Borg in the node room one group at a time, working left and right in the following sequence: After dealing with the Borg at the entrance, clear the Borg near node B2, then A2, then up to the top level to clear B1 and A1. Finally jump down to the bottom level and clear A3 then B3.

When the room is clear, one player goes to the console near the entrance and uses it to enter the console room. For the purpose of this walkthrough, they will be known as the "Console Operator" while the remaining players become the "Fire Team".

The console operator deactivates the shields on the nodes allowing the Fire Team to take them down. To lower the shield at "Beta-3" use the central console and select "3" then "Beta". This process is repeated for each power node. Wait until the Fire Team is ready before dropping each shield.

The time the shields stay down can be extended by using the "Extend shield time" consoles located along the left and right walls. These consoles can be activated once the corresponding node is down to 50%. As you beam in to the console room, the consoles match the layout of the node room; Alpha on your left and Beta on your right, with floor 3 on the lower level and floor 1 on the upper level.

Once the shields on the node go down a group of Borg will spawn at the "Extend" console for that node. You have a little time to draw them away from the console before the node is down to 50%. When they are away from the console, use it to extend the shield time and then deal with the Borg after the node is down. If the fire team fail to take down the node, these Borg will despawn.

Tip: You can "kite" the Borg, drawing them to the other side of the room, allowing you to work the console.

Once all six nodes are destroyed, the Console Operator exits the room and destroys the lower IMR that you passed earlier, then heads toward the "boss room" to wait for the fire team.

The Fire Team should by now be ready at node Beta-3. Listen to the female Borg voice to find out which node you are currently at, and after preparing your buffs, abilities, and high DPS weapons, report the node identifier (Eg: "B3" for Beta-3) to the console operator who will then lower the shield at that node.

If you fail to destroy the node, the Borg will despawn, the shield will go back up and the node's health will be reset!

Starting at Beta-3 and proceeding upward, one level at a time will set you up to complete this section efficiently. When you get to the Alpha-1 node on the top floor, it will not spawn Borg. 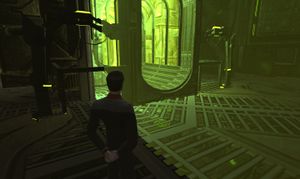 Once all the power nodes have been destroyed the force fields protecting the IMRs will drop. One member of the Fire Team should destroy the top IMR by overloading the diamond-shaped console near the IMR, while the console operator destroys the other. The rest of the Fire Team leave the node room, heading back the way they came.

Tip: Running into the IMR at the top of the Node Room on an Elite mission will unlock the 'Assimilated' accolade (allowing you to collect a Borg Science Bridge Officer Candidate at Battle Group Omega). 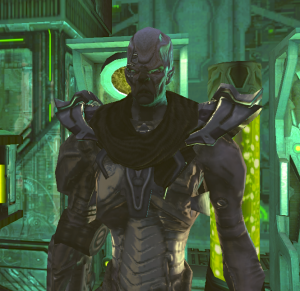 In the final part of the mission, players must defeat Tosk of Borg, who is comparatively weaker than other Elite Tactical Drones.

Entering the room will activate the Borg within, so it is generally a good idea to wait at the entrance until the team has assembled and prepared their buffs, abilities, and high DPS weapons.

Enter the room, and from the doorway, focus on the right wing of Borg, then the left before going after Tosk.

This is an effective tactic for completing the optional quickly and efficiently.

When first entering the node room, kill the Borg in the immediate area, and then jump over the left and right fences to the floor below. Leave one team member to enter the control room and operate the shields. Clear the bottom floor of all Borg and then take out the nodes there, taking time to kill the new Borg that spawn. This gives the teammate in the control room time to kill his/her drones. Make your way to the second floor and repeat the process, taking out the Borg and the nodes consecutively. Again, kill the new Borg that spawn at each node. Head up to the final floor and repeat the process, taking out the IMR straight after the final node is down. The person in the control room now heads for the final IMR on the entrance level and the bonus is done. Using this tactic can leave up to 7 minutes left on the bonus clock, as opposed to the usual 2 minutes left from a full clear first, which leaves little margin for error, sometimes failure.

It is also worth noting that this tactic seems to be more effective if you find yourself in a group with lower-geared players, although it takes time to eliminate the drones that spawn when the shield goes down, as said before it allows the player in the control room a few seconds to clear up the Borg plaguing him/her. It also alleviates the risk of newbies accidentally kiting the drones to the next floor/node and creating problems when trying to take additional nodes down. (This can lead to multiple attempts being made to take down a single node).

The following equipment can be helpful in completing this mission: