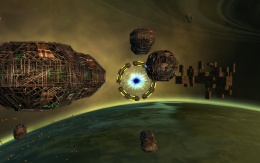 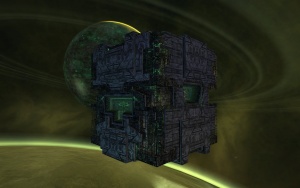 A tactical cube guarding the vortex

This mission is the first installment of a two-part story. The Borg are attempting to travel back in time to awaken inactive drones that were left in an an underground facility on the Vega Colony many years earlier prior to the arrival of the Khitomer Task Force.

In this mission the players confront the Borg in the Quadra Sigma System where the Borg are attempting to establish a temporal vortex so that they can travel back to the past. The players must stop the Borg from entering the portal and ultimately defeat the leader of this group. 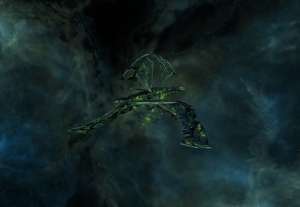 Admiral D'Vak has received a report of Borg activity in the Quadra Sigma System, and asks the players to investigate. On arrival in the system the players discover that the Borg have established a temporal vortex in orbit over the planet, with the intent of sending an invasion force back to assimilate the Federation in the past.

The Borg send waves of vessels towards the vortex, along with heavy reinforcements. The players destroy the Borg Transwarp gates that are feeding ships into the vortex, thus stemming the incursion, but some Borg ships have already made it through.

Once the Transwarp gates are destroyed, Donatra's ship, the I.R.W. Valdore, a massive assimilated Romulan dreadnought appears and confronts the players.

A large Borg fleet is trouble we don't need. Also, levels of chroniton particles detected in the system could mean that the Borg are attempting to open a temporal anomaly.

I want them stopped before they can do anything that will damage the timeline.

There is an alternative walkthrough here.

This mission is one of the original Special Task Force missions which were introduced as a set of three missions, each involving both space and ground combat. These missions were split into separate space and ground missions with the release of Season Five: Call to Arms on 1st December 2011.

In the original form, after destroying the Transwarp gates, players would follow the Borg back in time, through the vortex to complete the ground portion, now known as “Khitomer in Stasis”, where they discover that Donatra, the former Romulan empress who has been missing for over 20 years is now Borg.

In true "boss" style, Donatra leaves the players to fight her minions while she makes her escape. After defeating the ground forces, the players returned to space to stop her ship, in a battle that is now the final portion of this mission.