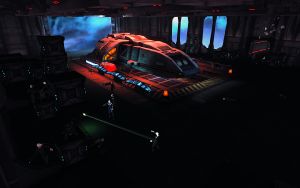 The Borg are boarding the Khitomer 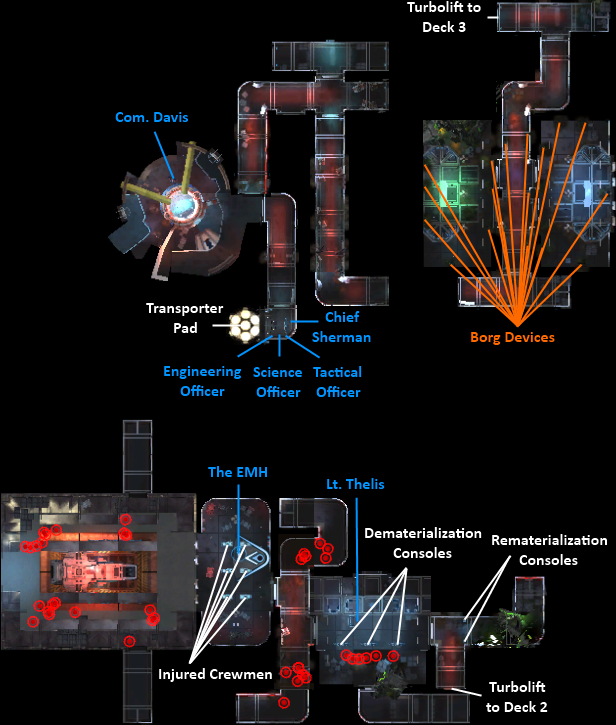 Talk to the EMH[edit | edit source] 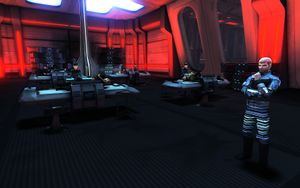 The EMH in the Auxiliary Medical Bay

You transport to a provisional Medical Bay right next to a shuttle hangar only separated by a force field. In the shuttle bay the Khitomer's Crew takes a stand against the Borg. Right in front of you you see the EMH. Talk to him, and he will ask for your help.

Walk close to one of the Biobeds and scan an injured crewman.

Return to the EMH[edit | edit source]

Take your scan back to the EMH and talk to him. The EMH will complement you on your medical skills and sends you right to Lieutenant Thelis in Auxiliary Control. 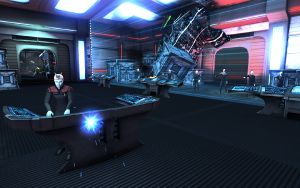 Walk out of the Auxiliary Medical Bay across the corridor and enter Auxiliary Control. You will find Lieutenant Thelis working on a console in the center of the control room. On the right, there are several Borg, only contained by a force field. Talk to him and he will ask for your help in dealing with the intruders. His idea is, to use the Tranporters to beam the Borg into space.

Use any of the three consoles next to the force field in order to dematerialize the Borg Drones.

Lt. Thelis sends you to the hull breach right outside the Auxiliary Control Center. Walk to the East and use one of the two consoles next to the containment field there. The Borg rematerialize behind the field and are sucked into the vacuum of space. Thelis will be safe to work in Aux Control, but now you have to help out Commander Davis in Main Engineering.

Walk down the Corridor to the South and use the Turbolift. 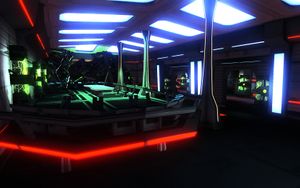 After leaving the Turbolift, Davis orders you to destroy six devices the Borg have installed when assimilating the deck. This will be your first enemy encouter in the game so take your time to get familiar with your equippment and the Ground Combat interface.

The Drones will ignore you until you afflict damage on them, directly by attacking them, or indirectly by blowing up a Borg Device close by.

After destroying the devices, Davis orders you to find another turbolift and get to Main Engineering. 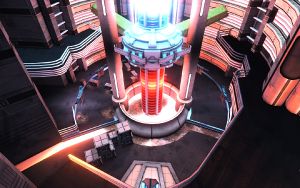 Walk down the corridor North. At the T junction turn left and take the turbolift to Deck 3.

You enter Deck 3 in the South East corner. Fight your way up North and turn left at the next junction. Follow the corridor until you find a barricade. That is the entrance to Main engineering.

Go down the ramp to the Barricade[edit | edit source]

Commander Davis orders you to head down the ramp and meet the defending forces at the barricade next to the Warp Core. 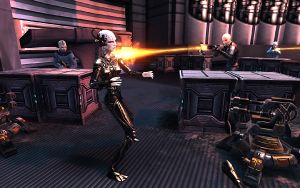 Battle at the barricate

After reaching the barricade you have to defend it for 30 seconds. Actually you don't have to do anything to accomplish the objective. Even if you don't kill a single Borg, Commander Davis will thank you and send you to the Transporter Room in order to get back to your own ship. 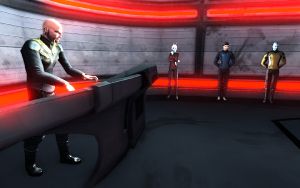 Behind Davis there is a corridor leading to the Transporter Room. There three officers waiting for you to join you. Talk with each of them to learn about their abilities.

Talk to the Tactical Duty Officer to learn about Tactical Bridge Officers. They will improve your combat abilities.

Talk to the Engineering Duty Officer to learn about Engineering Bridge Officers. They will boost your ship's capabilities and deploy devices in the field.

Talk to the Science Duty Officer to learn about Science Bridge Officers. They will heal and bolster you, while obstructing the enemy.

After listening to all the Bridge Officers, talk with Chief Sherman which will allow you to collect your mission reward. Depending on your playing style, choose one of the three Bridge Officers. If you don't know which one to choose, take the

After gathering the reward you may invest your first 300 Skillpoints, which means that you can increase 3 Skills. If you don't know, which ones to choose, take