Each member of the team should have the following:

For Elite Ground, players should also have the following:

The specific Borg Tech that used to be found in “Infected” is ship shields (space) and personal shield generator (ground). The rewards that you used to be able to get with these drops are now part of the Omega reputation track. 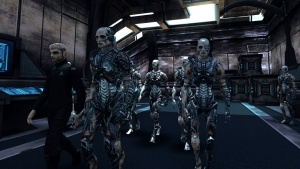 This part of the mission takes place inside Starbase 82. You will have to progress through a long series of rooms full of Borg. The Borg will range from normal Borg drones (easier to kill) to Elite Tactical Drones (harder to kill). Borg will be in groups -- do not draw attention from more than one at a time.

When fighting a group of Borg, it's important to pay attention to where the Borg patrols are. You don't want a patrol walking into a fight. A good strategy after drawing aggro is to get the Borg to chase you into a previous room. That way you won't get surprised by a wandering patrol.

Continue room to room in this fashion until you come to the mini-boss room. You will know when you're there because it's very different from all the other rooms, and looks like what you would expect to see on a Borg ship, not a starbase. The same rules apply for the mini-boss. Hit and run tactics are good - retreat back so you don't have to fight them all at once.

Once the mini-boss is destroyed, that room will be your new respawn point, and you will be on the final part. 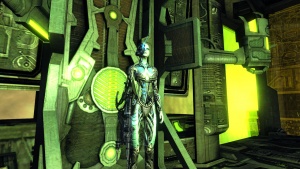 Rebecca Simmons is Manus of Borg 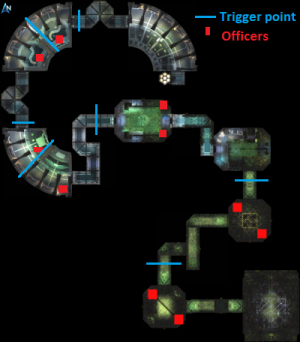 Locations of 10 officers for optional

Optional: Save all 10 officers from being assimilated. The time limit is 15 minutes BUT each officer has it's own proximity alert and approaching them will initiate the workers to begin assimilating them). This is becoming a difficult optional to complete unless the team is aware of what is needed to be done. Force fields stop you from rushing ahead and skipping Borg.

Strategy: As you approach a sector with an officer/s in make sure the team is ready before proceeding (don't advance too far or the workers will begin assimilating the officer/s). 1 or 2 people then rush the workers (knowing where they are to begin with is advantageous) and use knockback weapons such as the pulsewave assault or blast assault and abilities such as tactical or science grenades (Anesthizine Gas or the new STF stun grenades) while trying to avoid agro from nearby Borg NPCS. Note that a combination of Ambush, Stealth Module, Target Optics, and some of the more powerful AoE attacks will deal crippling damage to the drones, and two such shots should easily destroy the drones. The 3 remaining players can focus on any 'agroed' Borg (if a healer is around they should focus on keeping the team alive). The time limit is short and any prolonged incapacitated players or multiple respawns significantly increases the chance of failing the optional.

When faced with 2 officers to save at once (the big room before the miniboss and the 2 main rooms afterwards) the team should, in advance, call who is going to rescue which officer (recommend 2 per officer and 5th draw agro or heal if a medic).

Potentially bugged: There have been some claims that the officers die or get assimilated too soon.

The Finale In the final room with Rebecca Simmons, there are four corner platforms and a larger center one. Enter together. Best not to aggro all of the drones at once. Keep the middle cleared at all times as these 3 can hit you anywhere in the room. Generally if you don't shoot at a corner, they won't shoot back. Turrets, drones, escorts and mortars often shoot indiscriminately drawing aggro from all corners of the room at once. This usually ends badly and should be avoided at the outset. Mortars can be set up just outside the doorway in the hall where they can still inflict damage without being hit.

You'll need 3 jumpers and 2 tanking defenders. You must quickly lower the shields in all four corners, then shoot and destroy the center power node to unleash Rebecca. To lower a corner shield, 3 players must simultaneously enter the sequence in that corner, then immediately upload the virus to keep that corner shield down. It is recommended that the middle player upload the virus. Once the first corner shield is lowered a timer starts. You must complete the other 3 corners and destroy the center platform power node before the timer runs or that corner will reset. All four corners must be lowered before you can shoot the center power node. Jumpers should only fight when necessary and focus on quickly lowering the corner shields.

Corner drones can be killed by shooting them or by pushing them into the soup. Weapons with a strong Knockback or REPEL feature can be used to knock corner drones out into the green soup. Using this method, jumpers can often kill drones with a single shot. Imagine you are playing pool. The Borg is the ball, your rifle is the cue, and the soup is the pocket. Take an extra moment, line it up and squeeze off a REPEL shot...splash goes the Borg. You might need to also give an extra push, flying dropkick or another shot. I'm partial to any High Density Beam Rifle with a secondary REPEL. Others like the various assault rifles/shotguns with Knockback. I find the REPEL secondary feature of any High Density Beam Rifle (any type) is slower to reload but very consistent and effective at close and long range.

Rebecca fires a conventional weapon and chain lightning which jumps from player to player if you are too close to each other. You will light up with a blue target reticle before Rebecca shoots chain lightning. If you can, take cover when this happens and you - and nearby teammates - won't get hit. Chain lightning is usually more deadly to adjacent players than the one who gets shot.

Everyone that falls into the soup dies - a good place for Borg, but a bad place for you. Try not to. If you do, have a teammate revive you. Jump up on the low end of a pipe, the protruding edge on some of the lower platforms or stumble over to a ramp. Do not respawn. If you respawn, you'll be locked outside in the hallway until the battle is over. One exception: if you die in a remote location while battling Rebecca, you may elect to respawn and activate any team buffs you might have to boost the remaining players. Automated turrets and mortars in the hallway will also draw Rebecca's attention giving the remaining players precious time to heal and recharge. 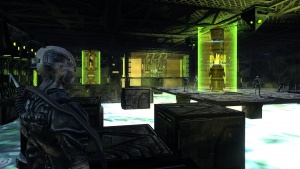 Infected Ground Elite is widely considered the hardest STF to reach the optional objective in, however Cure Space Elite is considered harder to win altogether.