Mission: In the Shadow of Cestus

In the Shadow of Cestus 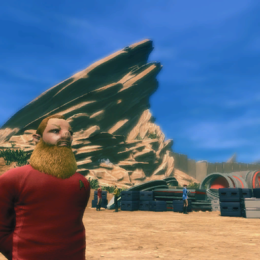 In In the Shadow of Cestus, the player provides Starfleet support on a planet occupied by the Gorn.

The Player is sent to Edren IV to back up Federation research teams on the planet. As the player's ship enters the system, they're hailed by the USS Zheng He, whose captain invites the player with an away team to the planet. On the surface, the player's away team, including Tarsi and Ensign Hunter, meet Skavrin, and begin taking mineral scans. While this happens, one of the Gorn ships explodes, and the Gorn turn against the Federation forces, also stranding the player in the valley. While remembering Kirk's reports on the planet, Skavrin recommends to the player to make a bomb with the resources available in order to escape from there. Skavrin's plan succeeds, and the player is able to escape, rescue the Federation scientists and returns to the ship. The player finds the Zheng He incapacitated, and needs to defend it from a Ddraig Cruiser. After the player helps the disabled Daedalus class vessel, its captain recommends the player to investigate the debris of the exploded Gorn ship. While doing it, Skavrin discovers that the Romulans are responsible for the explosion. The player then has to disable the same Gorn Ship and reveal to them who was truly responsible, and then it's up to the player and the Gorn captain to defeat three Romulan vessels. As the battle concludes, the Gorn captain and the player agree on resuming scientific research.

Ever hear of Edren IV? Jim Kirk got into a tussle with a Gorn there and barely lived to tell the tale.

Both the Gorn and the Federation have teams there now. I'd like you to back our people up in case the Gorn decide to engage in a little "cowboy diplomacy."

Head to Edren IV and assist the researchers there.