Honor Bound is the very first mission for characters of the Klingon Empire and is automatically given after entering the game.

You have completed your training and are ready to command a ship in service to the mighty Klingon Empire. First, you need a crew. Speak to the sparring master to find brave and skilled officers willing to fight by your side.

Seek out B'Elotja, the Sparring Master, at the Warriors Hall. 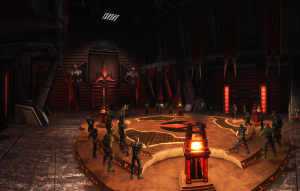 Welcome to the ranks of Klingon Warrior.

I know your heart burns to battle the enemies of the Empire, but only a fool would command a ship with no crew. I know a group of young warriors, much ,like yourself, who also yearn to earn glory and honor in combat.

They seek a great leader to fight alongside. Tell me, are you that leader?
I am the best warrior you'll ever see!

Are you a child?

You go into battle without the skills you need to win! I wonÄt allow that!

You need to train before you're ready to fight.

I Am Ready to Fight

A quick learner, I like that! You could be a great leader, but first you must prove yourself. This is the Hall of Warriors. The best fighters in the Klingon Empire come here to test their skills. Defeat some of the officers we have here and I'll consider assigning you a crew.
I am ready to fight!
When you are ready to begin, challenge any of the officers in the Hall.

Do not hold back when you are fighting -- use all of your heart and skill. But remember, an honorable warrior faces his enemies here with only his blade or his hands. Fighting with a bat'leth requires more skill than merely vaporizing your enemy with a disruptor.

Energy weapons are disabled in the Warriors Hall. Use your fists or a bat'leth!

Challenge and Defeat Anyone in the Warriors Hall[edit | edit source]

You dare challange me?
Yes! Prepare to defend yourself!

Start the Next Fight

You're not showing me your best, <name>!

I won't let any officer here serve under a captain who is afraid! Use all of your force and skill -- this is battle! We are not weak like the Federation -- we do not hesitate to shed blood! Return to the ring and defeat another fighter; prove your worth to your future Bridge Officers that will serve on your crew.

I see the fire in your heart!

You are a strong warrior. Any officer in the Empire would be honored to serve ar your side. These three Bridge Officers are the best candidates in their respective fields of expertise -- tactics, science and engineering.

They are warriors, and they will serve you well in battle.