Preceded by:
“Into the Hive”
Followed by:
“Borg Disconnected”
Rewards
Experience Points:
516 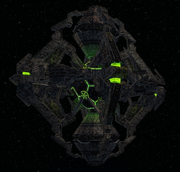 You are sent to destroy the Borg queen's thought processes, which are contained inside a highly defended vessel. It is guarded by 6 cubes on normal, with a smattering of spheres. After these are destroyed, two Borg command ships warp in. You must stay within 5km of the Queen's vessel to not be destroyed by lances. After all of these are defeated, you will be able to damage the Queen's vessel. Stay a bit away from it, as it lets out a highly damaging pulse every so often. The Queen's vessel has over 1,000,000 health so be careful.

Admiral, the Borg Queen has inserted her consciousness into a vessel near the Borg unimatrix.

The U.S.S. Houston has already reported to the area. Join it and defeat the Queen!