Plus all of the following:

In Hearts and Minds, the player investigates the Donatu Prime Lunar Research Station and discovers the unethical research performed there by Doctor Sibak.

When the player enters the station the away team is attacked by an automated defense system, that the player needs to override. While investigating the base the player finds evidence of medical experimentation. Finally, the away team finds a laboratory filled with clones of Doctor Sibak, all but one in stasis.

When talking to the clone, he attacks the away team, trying to stop them from obstructing the research. Finally, the player finds another room filled with clones, who immediately attack. After sweeping the station, the away team finds no evidence that Sibak experimented on any other sentient life forms than his own clones.

I've lost contact with an old . . . colleague. Doctor Sibak was a Vulcan priest, but he worked with the Vulcan science academy studying psionic phenomena.

A few years ago he went into seclusion on a remote research station in the Donatu system. He hasn't been heard from in some time. I'd like someone to check up on him.

Don't worry, He's just a typical Vulcan by himself. You shouldn't have any problems.

Several years ago, a reclusive Vulcan scientist and mystic by the name of Sibak settled a research station on a moon of Donatu Prime. He was a psionic adept of considerable power, and having him on the Neutral Zone makes me wonder what sort of information the Federation might be uncovering through his telepathic skills.

Our traffic analysts have indicated that the station is no longer reporting. Now is the perfect time to find out what exactly has been going on there. 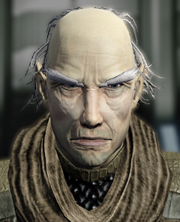 This mission is repeatable and can be replayed to obtain additional copies of the rewards, however there is a rather large cooldown so repeating it within the current event may not be possible. Replaying the mission awards an additional

"In defense of the kind soul who spent their own personal time making this mission quite some time ago but was asked if they would hold of publishing it so we use it for a fun little Friday the 13th event - that person doesn't deserve the crap laid on them by this thread." (sic)[2]