After warping into the system, the team will have one minute to read the briefing:

<rank>, transports bringing supplies we need to maintain the starbase are en route, but long-range sensors have picked up enemy forces on the way as well.

We need to protect those transports until they can reach the starbase and deliver their cargo.

Defend as many transports as you can! You have 15 minutes. 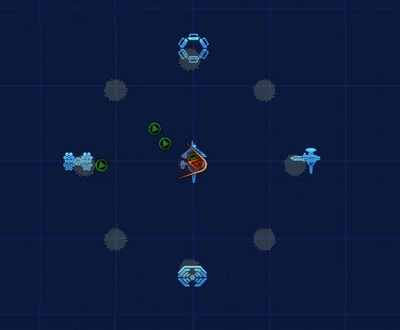 Once the minute is up, freighters will begin spawning at any of the eight waypoints marked on the minimap. Along with each freighter is a sizeable group of enemy ships. The players must coordinate with each other to draw fire away from the transports until they've safely docked with the starbase (it takes rough ninety seconds to reach the base, and another fifteen to dock - more if they get tractored or immobilised). Most of the ships in any group can be tanked, but usually 1-2 (the thoughest) seem to ignore attacks completely and keep on the freighter all the time (they have to be destroyed, immobilised, outhealed or otherwise neutralised).

Once a transport is docked or destroyed, the ships attacking will cease firing if not fired upon any further (exception: some fighters and turrets). In any way they will warp out soon afterwards and will never attack any other freighter or the starbase. It is thus advisable to keep an eye on the freighter and break off combat once he is out of the game.

There shouldn't be more than two freighters under attack at a time, allowing two-three players to defend each active waypoint. The starbase itself will not be fired upon, so focus on the ships near freighters.

The total number of Freighters varries - depending on how much are saved and how long they took to get to the base (the longer one is in the game, the longer until a new one spawns) - but does not seem to exceed 25. Every one the team saves earns a Fleet mark

(two if the "Fleet Marks Event" is active).

Once the fifteen minutes are up:

No more ships are inbound, <rank>. Thank you for your assistance.

You saved <number> out of <number> transports.