Mission: Everything Old is New

Everything Old is New 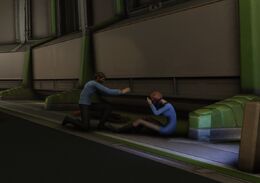 Using the Devidian portal discovered “previously”, the player travels back in time to Drozana Station in the mid-23rd Century to investigate the Devidian activities on the station. Using various parts from throughout the station to assemble a device to enhance the station's sensors, the player discovers that the Devidians' plan is to use the triolic energy of Driffin's Comet to pull the surrounding region of space into their phase variance. They then return to the future and report their findings to their intelligence contact so that plans can be made to counter the Devidians.

Obviously, the Devidians have found a way to harness this surge of triolic energy. The existence of the Devidian portal means they're traveling freely between the station in the present and the past.

Since 23rd century technology can't detect the Devidian phase-shift. that time period is rife with potential victims. The only choice now is to stop the incursion at the source.

You'll have to take that portal into the past and find out how the Devidians are creating this new surge of triolic energy. Stop them and find a way back without altering the timeline.

The Devidians must have found some way to generate a portal at the station so that they can feed on the humans in the past. While the humans are no friends of ours, a shift in the balance of power in that sector of space could have drastic repercussions. There is no telling if it would be positive for the Empire ... or not.

We cannot take chances. You must head through the Devidian portal into the past and find out how they are creating the temporal fluctuations.

Fortunately, the Federation in the 23rd century will never recognize a Klingon from our time, so you may be able to pass unnoticed.

Oh, and just in case: Don't kill anyone. We wouldn't want to accidentally change the course of history. Keep your team small, for similar reasons.

Go to Drozana Station, which is located in the Donatu Sector of the Beta Quadrant, and take a portal back through time to discover the source of the Devidian incursion. 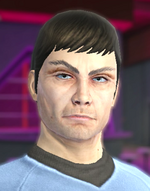