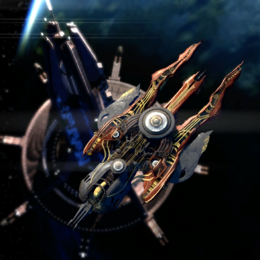 In Downfall, the player must defend Starbase 1 from J'Ula's forces.

Note that after completing this mission for the first time, the completing character will forever lose access to Starfleet Academy (23rd Century). This will prevent the character[1] from being able to cheaply buy Era-Appropriate Gear (Discovery-era Phaser Stun-Bolt Pistols or Prototype Photon Torpedo Launchers), and will also forfeit a Token for freely acquiring a Federation Shuttlecraft if the Token has not been spent yet. Players are recommended to buy any desired items before leaving the 23rd Century.

Starbase 1 has been attacked by the Klingons. Though they have repelled the first wave of attack, it is highly likely that more Klingon forces will resume the assault soon. We need you to assist Starbase 1 and defend it from Klingon attack immediately.

The arrival of House Mo'kai[sic] forces from the past is a cause for concern. J'Ula is a controversial figure, and we need to handle the situation with caution. The wrong move could spark an interstellar incident, and after recent events, that's the last thing anyone in the Alliance needs.

I've arranged a simulation for you - I want you to experience J'Ula in action, get an idea on how she thinks and fights. You might be facing the real thing soon enough, and I want you to be ready if that happens.

The arrival of House Mo'kai forces from the past is a problem. J'Ula is dangerous. Left unchecked, she could sow unrest in the Empire… even rebellion.

There's a simulation I want you to study. You'll face J'Ula in battle. Get an idea on how she thinks and fights. You might be facing the real thing soon enough, and I want you to be ready if that happens.

This needs to end, and soon. Qapla'!

House Mo'kai… a name thought lost to the past. J'Ula has returned, and she brings disruption and chaos along with her. A most worrisome prospect, and for more than the Empire.

It is said the best way to understand a Klingon is to face them in battle. I've had a simulation prepared that allows you to do so. I suspect you'll meet the real J'Ula soon enough; I want you to be prepared when that happens.

I bring you greetings from the Founders, and a most unusual assignment.

Our friends in the Alliance have troublesome news - an enemy long thought dead has returned. Left unchecked, she could bring disruption and unrest to the Klingon Empire. Such chaos could pose a danger to the Dominion as well. This will not do.

There is a saying - the best way to understand a Klingon is to face them in battle. And so, I've had a simulation prepared to allow you to do just that. Prepare yourself, study this J'Ula well. Knowledge is power, power leads to victory, and victory... is life.

Go to Starbase 1 and assist with its defense.