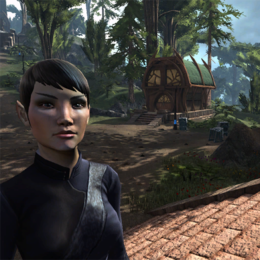 In Diplomatic Orders the player is ordered to escort a Vulcan ambassador amid fears of Klingon aggression, though all is not as it seems. 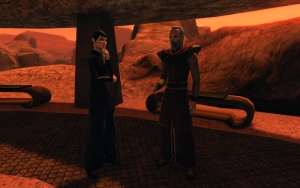 Admiral Quinn informs the player that the Vulcan Ambassador Sokketh has requested transportation from Vulcan to the monastery at P'Jem. The Admiral fears that the Klingons might use this opportunity to eliminate one of the Federation's most important diplomats, and orders that the Ambassador must be escorted.

Once at Vulcan the player is contacted by the Ambassador's aide, T'Pela, who requests that a shuttle be sent to collect the Ambassador as he prefers not to use a transporter. The player boards a shuttle and sets down on the surface where the Ambassador is in attendance at a Kal Rekk ritual. His aide states that Sokkath must meet with the abbot at the monastery at P'Jem, but High Priest Savin refuses his request to visit the planet. Savin states that the monastery is a sacred place and that Sokketh has not given him a reason for his journey there, though he agrees on the grounds that the player ensures to protect the sanctity of P'Jem. 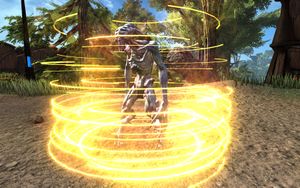 Ambassador Sokketh is revealed to be an Undine infiltrator.

Upon arriving at P'Jem the player's ship is confronted by a Klingon raiding party blockading the planet. They claim that an Undine agent has infiltrated the player's ship and request that Ambassador Sokketh be handed over immediately. The player defeats the raiders and disables the leading ship. The Klingon captain K'Tak hails the player and attempts to explain that Sokketh is not who he seems, but player remains unconvinced. K'Tak's ship cloaks and Klingon landing parties beam down to P'Jem to interfere with Sokketh's plans. An away team beams to P'Jem to repel the Klingon attackers and secure the monastery. 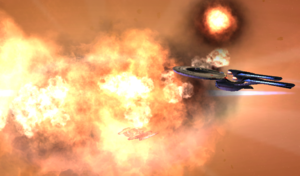 While on the surface, an urgent communication from T'Pela is received. She states that Ambassador Sokketh's remains have been found on Vulcan and that the Sokketh being escorted to P'Jem is an imposter; it turns out the Klingons were telling the truth! Sokketh realizes that he has been discovered and reveals himself as an Undine infiltrator, disclosing his plans to replace the abbot at P'Jem. When the Undine agent is overwhelmed by the away team it beams off the planet.

Upon returning to the ship, the player has to fight off an Undine bioship that was hidden in orbit. Starfleet dispatches reinforcements but informs the player that they must hold out until they arrive. The vessel is eventually destroyed and the data recovered is sent to Starfleet intelligence for study.

<rank>, we have a diplomatic mission for you.

An important Vulcan ambassador is travelling from his homeworld to the monastery at P'Jem. Capturing the ambassador would be a major coup for the Klingons or Orions, so we're assigning you make sure everything goes smoothly.

Please meet him at Vulcan. Once you locate him, speak with him about the transport mission.

Do whatever is necessary to keep him safe.

Escort Vulcan Ambassador Sokketh to the monastery on P'Jem in the Vulcan Sector of the Beta Quadrant.

You can find the ambassador at Vulcan, which is located in the Vulcan Sector of the Beta Quadrant.