The First City shipyard seen from the bridge of the Bortasqu' during the Day of Honor.

Day of Honor is an event in which the player visits the bridge of the I.K.S. Bortasqu' and talks with its crew about their actions of the previous year and determine whether or not they have been honorable. This mission is only available for a few days around April 5th each year.

Its counterpart for the Federation is “First Contact Day”, while the Romulan Republic has “Republic Day”.

On the Day of Honor, Klingon warriors typically reflect on their actions of the previous year and determine whether or not they have been honorable. This year, however, is special year for all warriors of the Klingon Empire! The captain and senior staff of the I.K.S. Bortasqu' flagship will be inviting all warriors of the Empire onto their bridge in order to introduce the valiant crew. 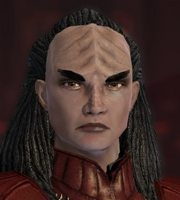