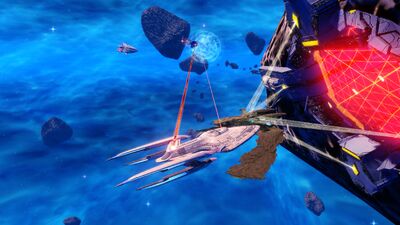 Azure Nebula Rescue is a 5-person space mission in which the players rescue Romulan ships being held by the Tholian Assembly in the Azure Nebula.

After the briefing, the team will have twelve minutes to rescue as many ships as possible by disabling the tractor beams holding them. T'liss Light Warbirds will reward 1 point, Dhelan Warbirds 2, Ha'apax Advanced Warbirds 3, and Falchion Dreadnoughts 5. The number and type of Tholian ships guarding each Romulan vessel varies depending on its type, and the number of Romulan Marks and Fleet Marks rewarded depends on the number of points collected by the team.

The Tholians are holding captured Romulan ships in the mysterious Azure Nebula. Assist the Romulan Star Empire by penetrating the Tholian defenses and freeing the captured ships.

Approach the Tholian bases and deactivate the tractor beams, allowing captured ships to escape. Collect as many points as possible before time expires.