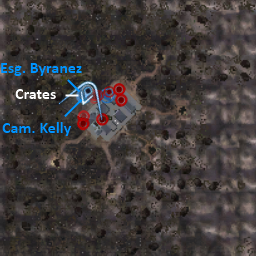 After beaming down to Vega Colony, you receive the reward for “The Price of Liberty”. You may boost another three skills. If you are uncertain, the following skills are suggested:

Commander Kelly is right in front of you next to the barricades. Speak to him and he will explain the situation. He'll send you over to Ensign Byarnez to get yourself equipped.

Ensign Byranez is standing on the right, under the roof. Talk to her. She will tell you what you need to know about kits. After the introduction she will allow you to take some gear from the crates next to her.

Here the mini-mission “Gather Equipment” is given to you. Simply approach the crates behind Byranez to choose your equipment and complete it.

As reward for the mini-mission, you will get a

[Phaser Sniper Rifle Mk I] and one of twelve Kits.

Depending on your profession you will get four different Kits to choose from. Not all Kits are equally useful when dealing with the Borg on Vega. The Kits granting you a significant advantage against the tutorial ground enemies are marked as recommended in the following list. Please note, that other kits and abilities become more important with other enemy groups as the game progresses.

After claiming your Kit, equip it from your Inventory by dragging it in the appropriate slot of your Status Window. Also switch weapons to use your new Phaser Rifle either by pressing "Z" (default keyboard layout) or the small button on the top left of your Powers Tray.

Your job is to rescue the remaining colonists, before the Borg can start assimilating them. Head into the colony in the south east. In the streets you will find scared colonists, who are surrounded by a group of three Borg Drones each. Try to aim when firing and to evade attacks by rolling or running.

Shut down the Transmitter[edit | edit source]

After proving your worth, Commander Kelly trusts you with the critical job of shutting down a Borg Transmitter. There are five identical Borg complexes in the East and South of Vega Colony. In order to accomplish the mission you must only deactivate one of them.

Choose the Transmitter to shut down from the mini map. If you approach the structure directly, you will encounter two groups of Borg, patrolling the track leading to the Array. Each of these groups consists of:

After fighting your way to the structure you will be attacked by two Borg Turrets mounted on top of the left and right column of the Force Field Generator. Each of these is more than two times more resilient than the Borg you encountered so far. In order to bring them down more quickly, order your Bridge Officer to attack the same target as you.

When the immediate threat is dealt with, take some time to regenerate your Health and Personal Shield. Approach the green control Column on the left to disable the Force Field.

You can now enter the Borg structure. But disabling the Force Field has woken up one Heavy Tactical Drone and two Tactical Drones from their alcoves. Again, take them out one at a time in concert with your Bridge Officer to disable them swiftly.

Now you are clear to disable the array by using the console on the right, standing in front of the Heavy Tactical Drone's alcove. Shut down the array to complete the mission.