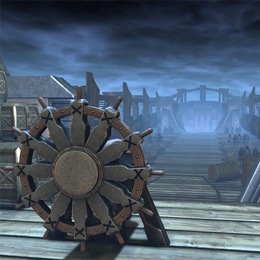 In Afterlife the player travels to meet Kahless at the Boreth monastery to learn how to stop the Fek'Ihri.

Impressed by your abilities, Kahless calls you to Boreth to help stop the Fek'Ihri. After defeating Fek'Ihri in orbit, the player must fight their way to the Shrine of Kahless. At the shrine, Kahless has to hold off Fek'Ihri attacks while the player meditates. The player then awakes on the Barge of the Dead where they must fight the Ferryman to force him to carry the player to Gre'thor, even though it is not yet their time. The player must then rally the dead so they will row the barge. Among them the player sees their old shipmates Jurlek and Doran. On arrival at Gre'thor, the dead will help the player fight off the Fek'Ihri as Doran opens the gates.

I have received a message from the emperor.

Kahless commands that you travel to the monastery at Boreth. He says that he will meet you there and instruct you on what you must do to stop the advance of Molor and his Fek'Ihri horde.

The Fek'Ihri are formidable. May you be victorious!

Meet Kahless in the Boreth system to learn what you must do to stop the Fek'Ihri horde.

The Shrine of Kahless