This article is about the T6 playable starship. For other uses, see Crossfield class.
Crossfield-class
~Science Vessel Variants

The Mirror Crossfield-class Science Destroyer is a Tier 6 Science Destroyer which may be flown by Starfleet characters, including Federation-aligned Romulan Republic and Dominion characters. The faction restrictions of this starship can be removed by having a level 65 KDF character or by purchasing the Cross Faction Flying unlock from the Zen Store. This starship can be used from any level upon completion of the tutorial experience. As you level up, this ship gains additional hull, weapon slots, and console slots.

Players can obtain this starship from a [Special Requisition Choice Pack - Tier 6 Promotional Ship Choice Pack], which are available during special promotional events. The boxed ship is not bound and so may be traded to other players or bought and sold on the Exchange for energy credits under the name [Special Requisition Pack - Mirror Crossfield Science Destroyer [T6]]. 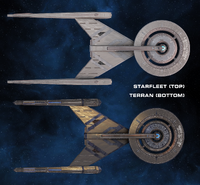 Comparison of Starfleet and Imperial Crossfield-class.

As incidents with the alternate dimension known as the "Mirror Universe" continue, alliance engineers have gotten a firsthand look at the I.S.S. Discovery, and used this knowledge in conjunction with wreckage from other Mirror Universe Crossfield-class vessels being rebuilt and retrofitted for service. This powerful line of ships was clearly designed for the treacherous nature of life in the Terran Empire, able to switch from a scientific mission to a fully armed combat ready starship at a moment’s notice.

In the Mirror Universe, it’s survival of the fittest, and even Science Vessels have to be ready to fight at a moment’s notice if they want to survive. The Mirror Crossfield-class Science Destroyer is retrofitted from ships that crossed over from the 23rd century into present-day space. While fitted with powerful deflectors, shielding, scanning, and other scientific tools, looks can be quite deceptive – at a moment’s notice, the starship can transform, hiding the delicate scientific instrumentation and bringing astounding firepower for to bear, overwhelming anyone who came prepared for a mere science vessel.

The Weaponized Helical Torsion is based on the same technology as the spore drive.

Activating the Tactical Mode transforms the starship from a typical Science Vessel into a combat-oriented Destroyer. This disables most of advanced science systems while activating additional tactical systems, and downgrades the Commander Science bridge officer station into a Lieutenant Commander, while the Lieutenant Commander Tactical station is upgraded to Commander. In Tactical mode, the ship's shield capacity will be reduced by 10%.

Tactical Mode may be deactivated at any time to return to the default Science Mode.

The Science Destroyer comes equipped with an Agonized Subatomic Disintegrator.

The Mirror Crossfield-class Science Destroyer comes with an Experimental Weapon slot, which is only activated while in Tactical Mode. This additional slot does not fit standard weapons. Unlike standard starship weapons, Experimental weapons are not affected by weapon firing modes, such as those granted by bridge officer abilities.

The Mirror Crossfield Science Destroyer comes equipped with the [Agonized Subatomic Disintegrator]. This experimental weapon seems from the mind of a scientist who sought to make a starship scream. When fired, it causes the target and a nearby secondary foe to decay over time, dealing physical damage and reducing their ability to resist any control effects.

Sensor Analysis is an active toggle ability available to the Mirror Crossfield-class Science Destroyer while it is in Science Mode. While maintaining a Sensor Lock on a target, the player gains a stacking effect that either improves the damage and power drain against an enemy, or improves any heal directed towards an ally. This effect stacks every 3 seconds, to a maximum of 6 stacks after 18 continuous seconds. To maintain the desired effect, the player must hold the sensor lock.

Federation starships come with standard equipment and weapons of the lowest mark available at the ship's minimum rank. The items provided are appropriate to the type of vessel and its related playing style.

By using an [Experimental Ship Upgrade Token], the Mirror Crossfield-class Science Destroyer may be upgraded to T6-X, unlocking an extra ship device slot, universal console slot, and the ability to slot an extra starship trait.

Following table compares this ship to other Crossfield-class variant.