First of the Miracle Worker ships developed by Starfleet, KDF and Romulan Republic. 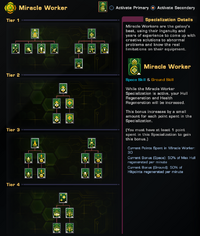 Miracle Workers are the galaxy's best, using their ingenuity and years of experience to come up with creative solutions to abnormal problems and know the real limitations on their equipment.

While the Miracle Worker specialization is active, your Hull Regeneration and Health Regeneration will be increased.

While Miracle Worker specialization is very engineering-oriented, available boff abilities range from defensive to offensive, including a variety of boosts to both healing and tanking, and energy weapons damage. This abilities allow you to push your ship to its very limits, using every last bit of power to find your way out of fight.

The following playable starships can be classified as Miracle Worker Starships:

Miracle Worker vessels have access to the Innovation mechanic, which reflects the ingenious solutions you and your crew can pull out of thin air to aid in difficult situations. The mechanic is comprised of two elements:

These requirements represent which type of Bridge Officer abilities - Tactical, Engineering or Science - player has to use in order to trigger the Innovation Effect. Player has to activate three boff abilities, and can activate them in any order. Ability Sequence Requirements are randomized each time the mechanic refreshes.

One of six possible Innovation Effects will be randomly selected each time the Innovation Mechanic refreshes:

All Miracle Worker starships are fitted with a versatile Universal Console equipment slot which can hold any Engineering, Science, Tactical, or Universal console. This is an additional Console slot, above and beyond the standard allotment for ships of the same Tier.

A large number of playable Tier 6 starships come with either an Ensign, Lieutenant or Lieutenant Commander Miracle Worker boff seating. However, these ships lack the built-in Innovation Effects and Universal Console Slot, and are thus not considered to be Miracle Worker Starships.