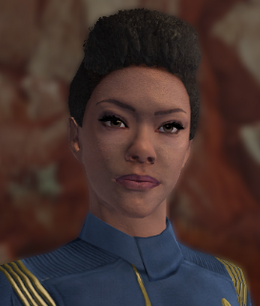 A simulacrum of Michael Burnham was created by the Excalbians in 2411 as part of their trials of good vs evil. Following the trials Burnham, aware of her artificial nature, decided to rejoin Starfleet. This version of Michael Burnham is taken from her existence shortly before the battle at the end of Season 2 of Star Trek: Discovery. 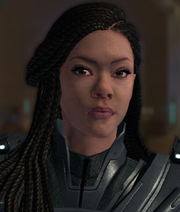 An additional simulacrum of Burnham was created based on an alternative future where the Discovery was destroyed and she became the Red Angel in place of her mother. This simulacrum may have been destroyed depending on the choice of the player.