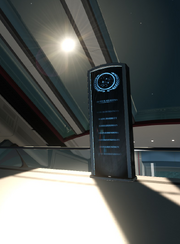 The current memorial to cast and crew on ESD

The original memorial prior to 2019

Memorials to the cast and crew of all Star Trek series and films can be found on Earth Spacedock, Qo'noS, New Romulus and Deep Space 9. They headline with James Doohan, DeForest Kelly, Leonard Nimoy, Majel Barret Roddenberry, Gene Roddenberry, Anton Yelchin, Aron Eisenberg and René Auberjonois before continuing with an exhaustive list of those who have contributed to Star Trek over its six decades of production.

Starfleet Academy has a number of plaques commemorating in-universe events such as the Breen attack on Earth and the death of Cadet Joshua Albert.

In 2013 an additional memorial was added to Mark Valentine Memorial, a Cryptic Studios' developer who died of cancer.

The Spock statue on Vulcan

There are large statues of Spock on both Vulcan and New Romulus. These were added with the death of Leonard Nimoy and commemorate Nimoy's huge contribution to Star Trek as well as being the first major voice actor for the game. They also serve a dual purpose of commemorating the character's in-universe contribution and sacrifice to both peoples.

Nog and Odo in Quark's bar

Following the deaths of René Auberjonois and Aron Eisenberg, Odo and Nog were added permanently to Quark's Bar in tribute to the DS9 actors and their recent contribution to the game. 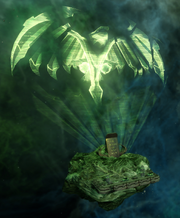 The memorial to the destruction of Romulus

At the Wolf 359 System and Romulus System, large memorials are visible from sector space. Both can be visited as a local space map. The Wolf 359 memorial commemorates the Battle of Wolf 359 against the Borg while the Romulus one refers to the Hobus supernova which wiped out Romulus and Remus.