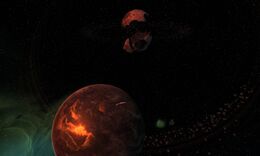 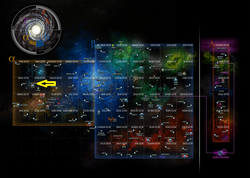 The Manek System is a system located in the Defera Sector of the Alpha Quadrant.

Thousands of years ago, it belonged to the Preservers. There are two anomalies in this system.

Manek Prime is an L-Class world that was populated approximately 25,000 years ago. Ruins linked to the Preservers have been found on the planet. The Federation Archaeology Council has requested permission to survey the surface of Manek III as well, but the remains of that world have been deemed too dangerous for an away mission.

An asteroid belt runs between Manek Prime and Manek III.

At least three planets orbit the star Manek, albeit one of these has been cracked. A clear-cut asteroid belt divides the space between Manek Prime and Manek III, which itself is surrounded by a ring of rocky chunks, presumably parts of the formerly intact planet.