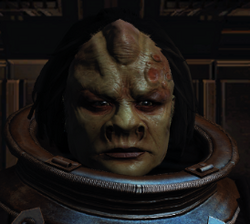 The Malon are an economically-motivated humanoid species from Malon Prime in the Delta Quadrant.

As the Malon lack the technology to recycle antimatter waste, which emits hazardous theta radiation, finding waste disposal sites is one of the most profitable undertakings in their society. When the U.S.S. Voyager first encountered the Malon in 2375, Captain Janeway offered them Federation antimatter waste-reclamation technology. Although the offer was rejected as it would destroy an entire industry, Voyager transmitted the technical specifications to the Malon anyway. 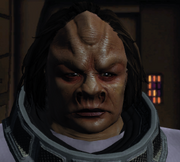 Although Malon appear to be quite advanced, their technology generates vast amounts of theta radiation as waste. And they have no safe, cost-effective way to deal with this radiation. Nevertheless, they have developed the ways to use this radiation as a weapon, releasing it during battle to slow down enemy combatants. Their vessels are equipped with advanced antiproton weaponry, spatial charge launchers and tractor beam emitters.