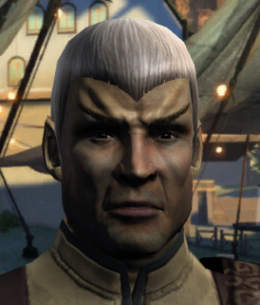 Malem is the Maiori of the Virinat colony in 2409.

Malem was a Commander in the Romulan Star Navy - and a former Senator - until the destruction of Romulus in 2387. He commanded an old T'liss Light Warbird, with Nevala serving as his first officer and D'Vex as his chief engineer. At some point Malem's ship responded to a distress call from a mining colony in the Eridan Belt but found no signs of life.

Around 2399 he arrived at Virinat with his crew, looking for a place to call home. They decided to stay, and as Maiori, Malem was able to help the floundering colony prosper again. Malem also established covert communications with D'Tan, who provided the colony with vital water reclamation equipment, and smuggled ship parts to the colony. In return, the colony's engineers provided repairs to damaged ships from the Romulan Flotilla.