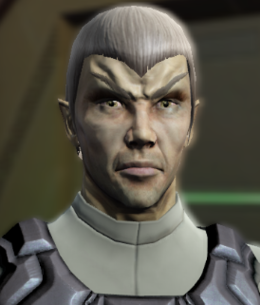 Lynian was initially fascinated by the Borg technology the Tal Shiar would bring him to study, but developed misgivings when Romulan Commander N'Vek began experimenting with incorporating Borg technology into the station's citizens. Those who dissented either disappeared or had their families captured to ensure their cooperation.