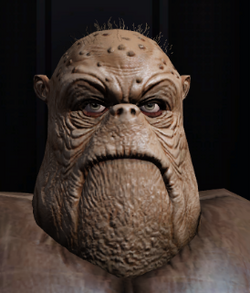 Lurians are a humanoid non-playable species native to the Alpha Quadrant planet Luria. They are rarely seen outside their homeworld. The most famous Lurian is Morn, a decades-long patron at Quark's Bar. (Star Trek: Deep Space Nine)

The Lurians are a reclusive species rarely going beyond the reaches of the Ionite Nebula, where Luria is located. They are governed by a royal family and are not members of the Federation.

Lurians have gray skin and multiple hearts, lungs and stomachs. (Star Trek: DS9) Their head appears to sit directly on the shoulders. Lurians have smaller ears than Humans and their face is dominated by their broad, U-shaped mouth. They are known to have hair, though they can lose it through external factors.