You may be looking for Lorix, a Reman Federation Duty Officer awarded from completing a Tal Shiar Command Code Duty Officer Assignment. 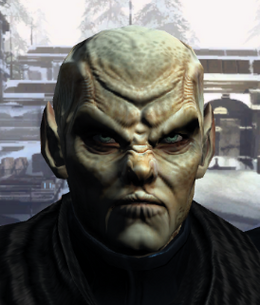 Lortrix is the leader of the Chaltok IV colony. He claims to be running a straightforward colony, but is secretly smuggling weapons. While he sells weapons to any buyer, he maintains ties with the Hirogen and the Tal Shiar.

Lortrix was one of the leaders of a Reman workers strike that turned deadly. He met D'Tan during the negotiations.