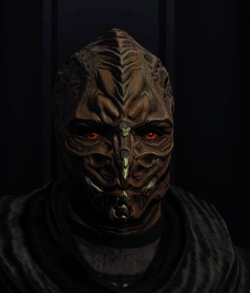 A telepathic species, Letheans are feared and respected as mercenaries throughout the Alpha Quadrant. Lethean telepathic attacks are almost always fatal.

Letheans are bald, with a vertical bone ridge that runs across their face and heads. They have small bone protrusions that can grow along this ridge and on their cheeks, and their skin is mottled and has multiple cartilage folds. Their eyes have a reddish tint. Letheans are descended from reptiles and prefer the dark. They have an average lifespan of 60 years.

Letheans are known for their ferocity and stubbornness, but are often thought to be unintelligent. This is a stereotype that Letheans exploit to their advantage. Seeing the rising strength of the Klingon Empire, the Letheans have offered their services to J'mpok. They have not been granted full citizenship, however, and continue to look for ways to prove their worth.