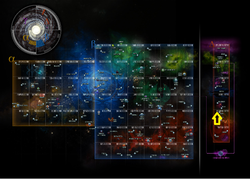 The Legira System is a system located in the Markonia Sector of the Delta Quadrant.

Four planets orbit Class A twin stars in the Legira system. Legira A has an average core temperature of 7,800 degrees Kelvin with a mostly hydrogen core; its twin burns more than 2,000 degrees hotter but has a similar composition. Legira II is an N-Class world that was last populated 15,000 years ago. Water exists there as vapor, but extreme buildups of greenhouse gases have made the atmosphere too dense and toxic for humanoid life.