This page refers to the NPC. For the duty officer of the same name, see "Law". 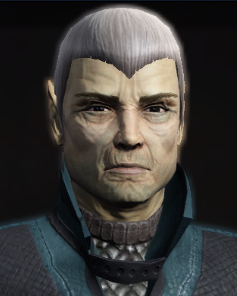 Law is a Romulan who is a former peacekeeper on Nimbus III. He fled to Nimbus III after the destruction of Romulus. He considered the Nimbosians "lesser species," and took it upon himself to become a Peacekeeper. Peacekeepers were a group dedicated to upholding the law on Nimbus III, but were widely perceived as a joke.

Law once provided assistance to a Starfleet officer by the name of Harvson who promised to stop the Orion Syndicate, but then left the planet after being paid off by the Orions. Law was captured and dragged through the streets by Orions loyal to Hassan the Undying, while the Nimbosians did nothing to defend him. He quit as Peacekeeper after that incident.