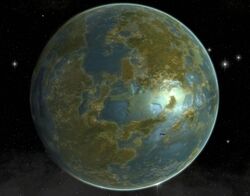 The surface of Lae'nas III.

Lae'nas III is the homeworld of the re-awakened Preservers and under the protection of the Deferi and the Federation/Klingon Empire. The planet is notable for the Preserver Archive that contains the ancients' knowledge and hundreds of Preserver individuals and which is located on a small island or peninsula. The climate is similar to Defera's. There are two anomalies on the surface and two more in the subterranean Archive.