You might also be looking for the similarly named mission 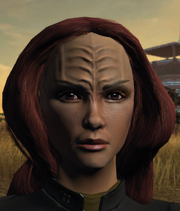 Miral Paris, who some Klingons believe to be the Kuvah'Magh

The Kuvah'Magh is a religious figure from ancient Klingon history. It is worshipped by a minority of Klingons, who believe the Kuvah'Magh to be reborn as a savior for the lost and lead them back to glory.

In 2377, the crew of a D7-class Battle Cruiser, launched in the 23rd Century and captained by Kohlar, journeyed all the way to the Delta Quadrant on their quest for the Kuvah'Magh. They believed they had succeeded when they learned of Miral Paris, the yet unborn child of B'Elanna Torres and Tom Paris of the U.S.S. Voyager. Eventually they could be convinced that Miral is not what they were seeking for, and Kohlar and his crew settled on a planet in the Delta Quadrant.

In 2409, Klingon Ambassador Kas invites Miral Paris, who has since become a Starfleet officer, to mediate at a peace conference between the Klingon Empire and the Federation on Regulus IV. Spurred by B'vat's propaganda, the talks are sabotaged by Klingons and their Orion mercenaries who believe Miral to be a false savior. Although the talks have failed, Kas eventually assists the player in chasing B'vat away before Miral can be abducted.