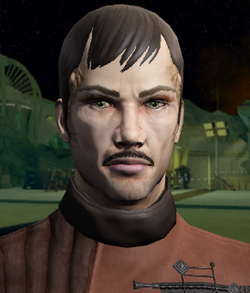 The leader of the Kyana colony

The Krenim are a humanoid species native to the Delta Quadrant and possess powerful temporal technology which can remove objects and events from history.

In the 22nd Century, the Krenim held over 200 star systems, known as the Krenim Imperium, but by 2170, their numbers were vastly depleted due to a series of large-scale wars. In 2410, the Krenim were swiftly invaded by the Vaadwaur Supremacy, and were thought to have been completely annihilated.

The Krenim survived, hidden, largely thanks to their allies in the Krenim Coalition who work with the Krenim in contributing to the Alliance war effort against the Iconians. As experts in temporal engineering, they were a particular threat to the Iconians and were attacked early on by their servitors in numerous timeline projections. 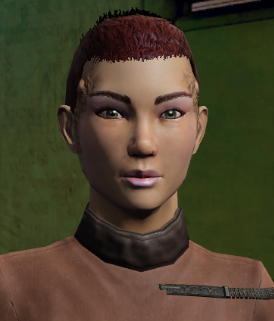 Although Krenim have allied themselves with the forces from Alpha and Beta Quadrants, after discovering that the Alliance was indirectly responsible for deleting his wife from the timestream, Noye rallies up a group of Krenim against them. Allied with the Sphere Builders, these insurgents were given access to Sphere Builder technology, allowing them to outfit their ships with weaponry and powers yet unseen by the Alliance.