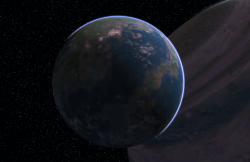 The homeworld of the Kobali, Kobali Prime is an M-class world orbiting a gas giant and site of an adventure zone. It is located in the Kobali System within the Kotaba Sector of the Delta Quadrant.

Hello, Admiral. I'm Captain Harry Kim, Starfleet's military liasion to Kobali Prime. The Vaadwaur have been assaulting the Kobali homeworld for months now. The Kobali are near a breaking point. They're not trained for war, not like the Vaadwaur. The Alliance is here to stop the Vaadwaur and help the Kobali reclaim their home. You and several others will be leading our forces here. I'll be doing some investigations to help support the effort. Good luck.

Vaadwaur communications intercepted by the player in “With Friends Like These...” reveal that the planet was once a Vaadwaur colony world and was also known as K'bala II.

Around 2320, the Kobali, originally a nomadic species, decided to found a homeworld and built a large city on the temperate western land mass on what is now known as Kobali Prime. By 2410, more than 80 million Kobali live on the planet.

With the support from the Iconians, Vaadwaur seek to restore their long-forgotten empire. Because the Kobali had been using Vaadwaur stored in hybernation chambers beneath the planet's surface to ensure the existence of their own species, Gaul sent a large Vaadwaur fleet to finish them off and reclaim their world. 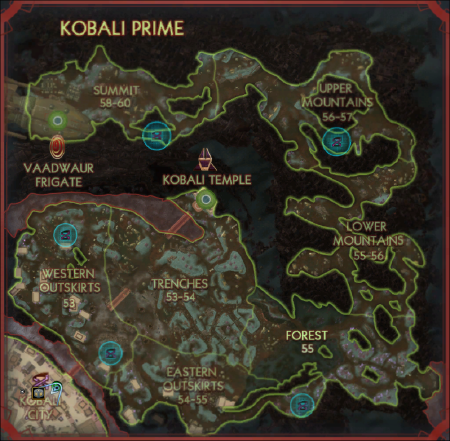