This article is about the species. For the society and government, see Klingon Empire. 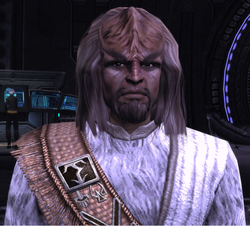 Ambassador Worf, son of Mogh, gin'tak to the Great House of Martok

Klingons are a proud warrior race from the planet Qo'noS that values tradition, honor, and strength above all else. Klingon culture is rooted in aggression and military prowess, and they are a feared and respected race throughout the galaxy. In game Klingons are natively part of the KDF faction. They can also be playable for the Federation after unlocking them from the Cryptic Store for 600

Typically Klingons can be distinguished by their cranial ridges, dark skin, and muscular build. Their internal organs feature multiple redundancies, allowing them to survive even the most severe battle wounds. The average Klingon lifespan can reach up to 150 years.

Klingons encountered in missions set in the 2260s and 2270s use the aesthetic from Star Trek: The Original Series which featured smooth headed Klingons (see Klingon augment virus for background information). This style is available for Klingon players to recreate, along with the uniform style.

Missions set in the 2250s, or otherwise featuring Klingons from that era, feature the redesigned Klingons from Star Trek: Discovery. As of 2018 however, this style is not available for players to recreate.