Klingon Recruitment was available for a limited time on the following dates:

Any Klingon Defense Force character of any species created during the Event will remain a Klingon Recruit indefinitely, allowing players to progress through objectives at their own pace. 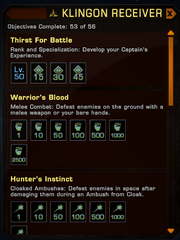 Melee Combat: Defeat enemies on the ground with a melee weapon or your bare hands.

Cloaked Ambushes: Defeat enemies in space after damaging them during an Ambush from Cloak.

Task Force Operations: Engage in fleet combat with our allies to destroy our enemies.

Episodes: Play through the story Episodes.