There are many elements that provide the foundation for the conflict;

J'Ula was displaced in time from the Federation-Klingon War (2256-57) with advanced Mycelial technology ( “Downfall”). Coming from a time where the Klingon's had almost beaten the Federation (done so under the banner of "Remain Klingon") provided stark contrast to the peace being cemented between the two powers. In addition, a few years earlier House Mo'Kai had been wiped out by the House of B'vat. This added grievance to J'Ula's cause.

Ceasefire between the Federation and the Klingon Empire to face the Iconian War in 2410.

J'mpok became Chancellor of the Klingon High Council via personal combat with Chancellor Martok. Martok's death was faked due to Torg's intervention ( “Brushfire”); the revelation of this fact throws the legitimacy of J'mpok's rule into question regardless of Martok's unwillingness to return to the Chancellorship.

In the run up to the Iconian War, the Empire settled its dispute with the United Federation of Planets in favour of joining forces in the Khitomer Alliance ( “Surface Tension”). This turn away from conquest created dissatisfaction among Klingon's who do not view their place as one of peaceful coexistence with powers such as the Federation.

J'Ula's arrival in the 25th Century caused concern among the Alliance leaders as she possessed powerful weaponry and was against the peace between the major powers. As a result, members of the Alliance began running its officers through Historical Tactical Simulations from J'Ula's past, catching them up to speed with the tactics of House Mo'Kai ( “The Plausibility of the Possible”, “Impossibility of Reason”, “Secrets”, “Downfall”).

In late 2410 J'Ula and her flagship, the I.K.S. Lukara resurfaced with a surprise attack on Andoria. There, it was revealed that J'Ula has been experimenting with the very same mycelial weapon that hurdled her and her forces into the future in the first place, though further investigation determined that this weapon severely damaged the Mycelial network in the process. In addition, her actions resulted in an incursion into normal space from the Elachi, in both normal and corrupted forms ( “Beneath the Skin”).

J'Ula began refitting her ships at the Beta Lankal System, although this was assaulted by Alliance forces ( “To Hell With Honor”).

J'Ula addresses the Klingon High Council at the Great Hall in 2411.

J'Ula managed to use a little-known Klingon law to reinstate House Mo'Kai which allowed her to address the High Council. Doing so, she calls out Chancellor J'mpok for his dishonorable deeds, such as stealing the Chancellor position while Martok still lives and not participating in the Hur'q battle, thus rallying other Klingon's to her cause. A skirmish ensued in the Great Hall and her forces, alongside Klingon Rebel forces, later began attacking various systems such as the destruction of Seedea Base and killing innocent civilians in the Qu'Vat System. J'Ula later went back into hiding, prompting Alliance Intelligence to begin thoroughly searching for her whereabouts ( “The Centre Cannot Hold”).

Aakar later led House Mo'Kai forces on a prison break on Rura Penthe, but they were stopped by Alliance forces ( “Best Served Cold”). 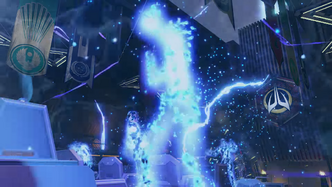 After some time, J'mpok sends General Martok to accompany an Alliance captain to search Khitomer. They eventually discover J'Ula and Aakar at the lower levels and a battle ensues, after which Aakar betrays J'Ula and escapes, prompting J'Ula to explain that the attack on Qu'Vat was his doing. They escape the lower levels and Adet'pa updates that J'mpok has brought a fleet above Khitomer. J'mpok sends Klingon forces led by Captain Ja'rod to engage them and Ja'rod is killed. He then launches a mycelial weapon provided by Aakar, damaging its facilities and killing numerous delegates. Fortunately, the Alliance captain, General Martok, J'Ula and Adet'pa were able to rescue a few survivors and escape. J'mpok later accuses them for committing the crime and a battle ensues involving Klingons and Alliance forces including notable Alliance flagships. The Alliance captain, General Martok, J'Ula and Adet'pa are forced to go into hiding, allying themselves with House Mo'Kai and labeled as enemies of the Empire. ( “The Khitomer Discord”).

J'mpok began sending various operatives to hunt down the Alliance captain, accompanied by General Martok, J'Ula and Adet'pa while they are in hiding. 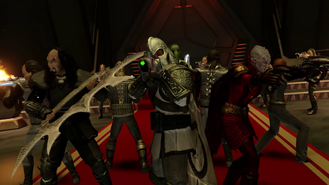 The Alliance Captain, General Martok and Matriach J'Ula emerge from hiding and begin taking action to clear their accusations of the Khitomer attack.

Some time later, Adet'pa discovered the source of the evidence depicting J'mpok's attack on Khitomer which would help clear their names, prompting them to emerge from hiding. The Alliance captain and General Martok met up with her in Shangdu on Nimbus III, where she has sought assistance from the crew of the Coldstar. Madran informs J'mpok about their presence and they send Klingon, mercenary and arena forces to engage them. They later met up with J'Ula in the Gorath System. The Coldstar's inflitration specialist Wilkins extracted the data, allowing Aakar access to it as well, while the others defeated Imperial Security forces. In orbit, following a massive battle involving House Mo'Kai, Klingon Rebels, Alliance and Imperial forces, J'Ula and Wilkins broadcasted the evidence. Despite clearing their names and free to roam within the Empire, the various Klingon Houses lost trust in the Empire and returned to their own homes. J'mpok dismisses the High Council and proclaims himself 'Emperor' of the Klingon Empire ( “Partisans”).

Pilgrimage to Boreth, Gre'thor and Rebirth of L'Rell[edit | edit source] 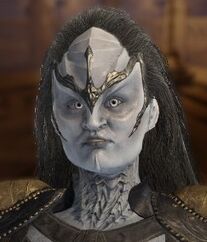 L'Rell reveals herself to the team in Gre'thor.

The Alliance captain, General Martok and Adet'pa met with J'Ula on Boreth to seek out the monks with the latter three beaming down. One of the monks, Tenavik, arranges several trials for J'Ula to undertake through the various chambers. Trials include facing Molor, the original Kahless and overcoming obstacles through the Time Chamber, while facing Aakar and the Sons of None where the former escapes. Touching one of the time crystals, J'Ula experiences a vision where she is surrounded by dead bodies and the Empire destroyed, and another where she witnesses the Empire united through the birth of someone. Tenavik then brought them to the cloning chambers to resurrect Chancellor L'Rell, however her soul is in Gre'thor. In orbit following a battle, Aakar plants a virus on the Lukara destroying the ship, but the Alliance captain managed to retrieve her crew ( “Knowledge is Power”).

They return to Boreth, this time with the Alliance captain joining to seek out L'Rell's soul to unite the Great Houses. Breathing the incense provided by Tenavik, they are taken to Koth, the void between Sto-vo-kor and Gre'thor. Martok reunites with Gowron who leads the team to the Barge of the Dead and journey to Gre'thor. Via asking Kortar, the various souls and defeating the souls of the Sons of None, L'Rell reveals herself before them and they journey to Fek'lhr's lair. They defeat Fek'lhr to prove their offer to exchange L'Rell's soul, but before J'Ula could offer hers, Gowron interrupts and offers his instead. J'Ula then suggests a new offer of Aakar's and J'mpok's souls to which Fek'lhr accepts, and the team escapes Gre'thor. With the rebirth of L'Rell, the Fek'Ihri return to attack Boreth. L'Rell launches a new flagship and sends a galaxy-wide call, where reinforcements from KDF and House Mo'kai warped in. With everyone united they all defeat the Fek'lhri and save Boreth, celebrating their victory in the end ( “Leap of Faith”).