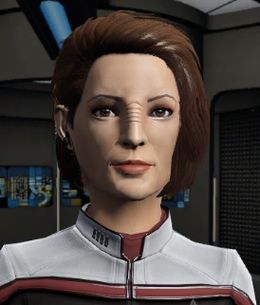 Captain Kira Nerys is a Bajoran Starfleet officer and current commander of the U.S.S. Defiant. A former Colonel in the Bajoran Militia, she became commander of Deep Space 9 following the Dominion War. By 2409, she had been elected Kai, the religious leader of Bajor.

After fighting the Cardassians as part of the Bajoran Resistance, she joined the Bajoran Militia in 2369 at the rank of Major. She was appointed liaison officer on Deep Space 9 under Commander/Captain Benjamin Sisko, and would later also serve with Lt. Cmdr. Worf and Ensign/Lt. Nog amongst others.

Kira commanded the U.S.S. Defiant on several occasions, and fought in the Dominion War (including briefly becoming a Commander in Starfleet and forming a temporary resistance cell with Leeta, Rom and Jake Sisko). In 2374 and 2375 she was in a relationship with Odo and was promoted to Colonel in the Bajoran Militia in 2375; when Sisko disappeared in the Fire Caves on Bajor that year, Kira became commander of DS9. After Bajor joined the Federation in 2393, she was commissioned as a Starfleet Captain.

By 2409, she had become Kai of Bajor, and was replaced as commander of DS9 by Captain James Kurland.