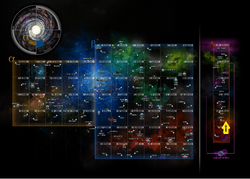 The Kinbar System is a system located in the Markonia Sector of the Delta Quadrant.

Twelve planets orbit a Class F white star in this Hierarchy controlled system. Three of the planets are M-Class, but two remain uninhabited. Mining the nearby asteroids and micronebulas is the main source of income for the Hierarchy here, but there is talk of harvesting the lish forests of Kinbar XIII. Hierarchy scientists predict deforesting will seriously impact the planet's climate, but the cost-ratio analysis indicates it is an acceptable loss.